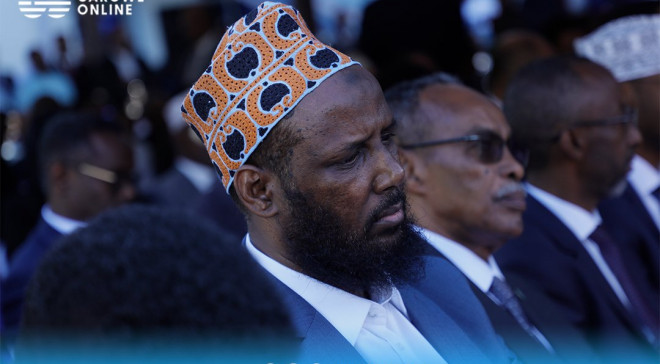 MOGADISHU, Somalia - Former Al-Shabaab deputy leader Mukhtar Robow has been appointed to Somalia's new 26-member cabinet which was released by Prime Minister Hamza Abdi Barre, in what could trigger a fresh storm of controversy between Villa Somalia and Southwest State leader Lafta-Garen.

On Tuesday, Hamza Abdi Barre beat the House of People timeline which required him to appoint a cabinet within 10 days, after he spent almost a month without putting the government in place. Ideally, it's expected that the government is formed within a few days after PM is appointed.

Mukhtar Robow, who has been under National Intelligence and Security Agency [NISA] hosue arrest for more than 3 years was appointed the minister for Endowment and Religious Affairs, making a comeback to Somalia's active politics after three years of absence.

On Monday, August 1 Garowe Online was the first media station to report about Mukhtar Robow's projected appointment to cabinet, in what would be a reconciliation strategy by President Hassan Sheikh Mohamud, who inherited a sharply divided country in May.

Robow who once had a $5 million US bounty on his head was arrested in December 2018 by the administration of former President Mohamed Abdullahi Mohamed better known as Farmajo after he declared interest in Southwest's presidency. Farmajo was campaigning for Abdiaziz Lafta-Gareen, the current president of the Federal State.

The former Al-Shabaab leader was arrested by security forces both from Somalia and Ethiopia, leading to the bloodshed which left over 12 people dead. Since then, he has been in house detention under NISA, and at some people, he complained about being denied basic rights.

The number of ministers appointed on Tuesday pending approval from the parliament was 26, including close allies of Hassan Sheikh, the president of Somalia, among them Farah Abdikadir who becomes education minister, and Ahmed Moalim Fiqi, ex-NISA director who is appointed as interior minister.

Last week, parliament instructed Prime Minister Hamza Abdi Barre to appoint ministers as part of the constitutional process within 10 days which will elapse on Wednesday. The PM is understood to have been consulting various stakeholders to form an all-inclusive government.