Robow's cabinet appointment: A strategy to defeat Al-Shabaab in Somalia? 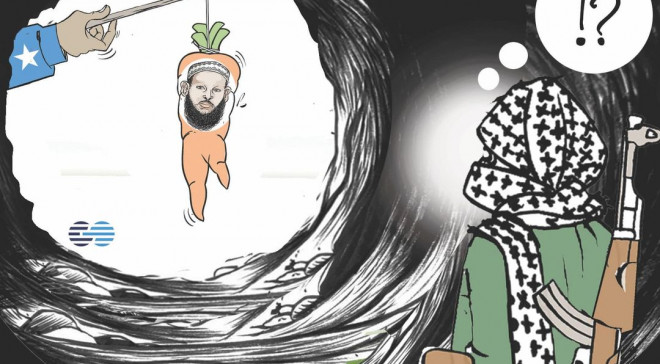 MOGADISHU, Somalia - There is no doubt that Tuesday's nomination of Mukhtar Robow as cabinet minister for Endowment and Religious Affairs by Somalia's Prime Minister Hamza Abdi Barre is the key talking point not only within the country but around the world.

From an innocent defector of Al-Shabaab to a government prisoner for over 72 months, Robow is no doubt the biggest surprise in the newly unveiled cabinet which President Hassan Sheikh Mohamud asked the Lower House to "approve immediately without delay".

Just after renouncing violent extremism sometime back in 2018, Robow immediately joined politics and was projected to be the possible winner of Southwest's presidency. However, his honeymoon in politics was rather too short given his troubles with the government.

With days to elections, security forces from both the federal government of Somalia and Ethiopia arrested the former Al-Shabaab deputy commander and took him to house detention, leading to clashes at Baidoa, the regional administrative capital of Southwest.

Later, it would emerge that this was a strategy by former President Mohamed Abdullahi Farmajo to tame Robow, who was competing against his favorite Abdiaziz Lafta-Gareen, the current regional president. The arrest caused unrest across the region, leaving at least 11 people dead.

While in detention, Robow often accused authorities of "denying me basic rights such as access to legal assistance, communication, and food". The administration in Mogadishu at that time denied the allegations, arguing that he was still a " threat to the society".

And his inclusion in the cabinet has caused mixed reactions with a number of analysts terming it as a strategy to fight Al-Shabaab militants who have continued to create havoc within the country and across the borders. The group controls large swathes of rural central and southern Somalia.

"Roobow becoming a minister is a declaration of war on Al-Shabaab. A welcomed move. We must win the ideological war with local solutions. The rest is noise," said Hodan Ali, a security analyst and close ally of Hassan Sheikh Mohamud.

"President Hassan Mohamud convinced ideological struggle against Al-Shabaab as important as the military struggle,' added Rashid Abdi. "Appointing Mukhtar Robow Abu Mansur - a man who has renounced gratuitous violence of Al-Shabaab, demonstrated his conviction in moderation - is a progressive step."

Hassan Sheikh has already declared that he will work with various stakeholders to defeat the militants, including by sealing revenue loopholes. And in return, the militants, who recently crossed over to Ethiopia, vowed to fight his administration.

However, there are still those who believe that Mukhar Robow's presence in the cabinet would give Al-Shabaab a headstart, with others accusing him of masterminding mass murder of innocent civilians during his time as Al-Shabaab deputy leader.

"This guy killed thousands of young Somalis, he was for a long time one of the most famous leaders of Al-Shabaab. Somalis are speechless today HSM-awarded minister post today's appointed government," said Hussein Yusuf.

"Appointing Mukhtar Robow to the cabinet is a slap in the face to the thousands of people who lost their lives to Al Shabaab," added Ahmed Cadde. "Robow was a high-ranking Al Shabaab commander for years and masterminded multiple attacks. This is not a man who can be reformed."

The federal government of Somalia usually gives room for defection and a number of them have been fundamental in the fight against the militants. However, a number of analysts argue that some of these militants end up acting as moles within the government.

Before his defection from Al-Shabaab, Mukhtar Robow had a $5 million bounty on his head from the State Department. President Hassan Sheikh pledged to tackle the militants, noting that " there is no room for negotiations at this time, we shall try to eliminate these terrorists".