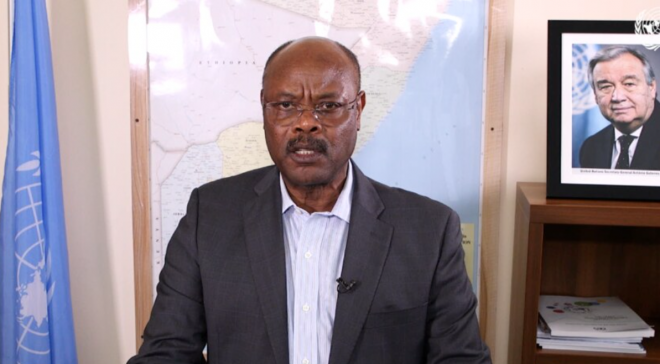 MOGADISHU, Somalia - The United Nations humanitarian agency has provided 9.5 million U.S. dollars to provide immediate assistance to communities in areas at the highest risk of famine in Somalia.

Adam Abdelmoula, the deputy special representative of the Secretary-General and also UN Resident and Humanitarian Coordinator for Somalia, said the new allocation from the Somalia Humanitarian Fund (SHF) will be crucial in ramping up life-saving responses to the needs of worst-affected communities in the Bay and Bakool regions in the South West State of Somalia.

Abdelmoula said in a statement released in Mogadishu, the capital of Somalia, Wednesday that the risk of famine and the number of people getting displaced has alarmingly increased.

"Somalia is on the brink of a humanitarian catastrophe, yet the funding needed to respond to rapidly growing needs remains vastly insufficient to avert the worst outcomes," he said.

According to the UN, the risk of famine in Somalia has intensified following a historic fourth failed rainy season, and now catastrophic hunger looms. It said the escalating drought conditions have affected more than 7 million people and displaced over 900,000 more people from their homes in search of water, food, and pasture, with the majority being women and children.

According to the UN, hunger is rising with about 45 percent of the population being classified as acutely food insecure, while 213,000 others are facing catastrophic food insecurity.

"We are racing against the clock to reach the most vulnerable and to prevent the loss of lives and livelihoods. I urge everyone to step up our collective efforts to help the people of Somalia," Abdelmoula said.

The UN agency said the risk of famine is the highest in the Bay and Bakool regions and particularly in the Bay where for the first time since 2017, the Integrated Food Security Phase Classification has confirmed pockets of catastrophic food insecurity.

It said the allocation will promote an integrated response to prevent the worst outcomes through cash for food, emergency livelihood inputs, provision of essential health, nutrition, and water as well as sanitation services.

The SHF is a multi-donor country-based pooled mechanism that allocates funding for the most urgent life-saving.