UN warns of “real risk of famine” for drought-affected Somalia 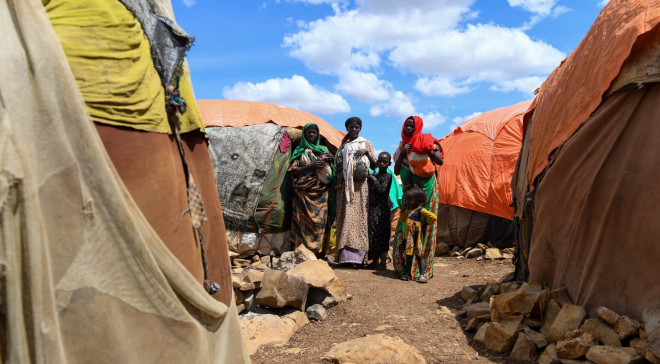 Cibaado stands next to her sister and children at Raama Cadeey IDP camp in Baidoa, Somalia. (UN Photo/Fardosa Hussein)

BAIDOA, Somalia — When the last of her camels died, 35-year-old Cibaado Mohamed had to flee her village in search of water, food, and shelter.

She thought of the last time a prolonged drought struck Somalia when famine conditions killed a quarter of a million people in 2011. She was desperate to escape the threat of famine again.

After a long trek with her five young children, Cibaado reached Raama Cadeey camp for internally displaced people (IDPs) in Baidoa, South West State. Established in January, the camp is one of many where UN and local and international NGO partners are working hard to provide food, water, sanitation, shelter, and protection support. It hosts thousands of displaced families, and a fresh influx of people arrives every day seeking aid.

“I need a lot of help,” said Cibaado, holding her three-month-old baby outside their new home — a makeshift shelter in the camp. “I need food and shelter, but there are a lot of us in this camp and it is not easy at all.”

The climate crisis is hitting Somalia hard. The country suffered through an unprecedented four consecutive failed rainy seasons, and it now faces a potential fifth. Baidoa is one of the areas hardest hit by the drought; an estimated 333,000 people were displaced in South West State in the first six months of this year.

“Everyone has to mobilize”

On 27 July, an inter-agency team of senior emergency directors from several UN agencies and non-governmental organizations (NGOs) accompanied the UN Resident Coordinator and Humanitarian Coordinator for Somalia on a visit to the IDP camp to assess the situation, and meet with displaced Somalis and the President of South West State.

The inter-agency team, representing the Emergency Directors Group (EDG) of the Inter-Agency Standing Committee, included senior directors from the Food and Agriculture Organization (FAO), the UN Development Programme (UNDP), the UN High Commissioner for Refugees, UNICEF, the UN Office for the Coordination of Humanitarian Affairs (OCHA), the World Food Programme (WFP), World Vision, and the International Committee of Voluntary Agencies.

“This situation is very dire,” said WFP’s Director of Emergencies, Margot Van Der Velden, while at the camp.

“Before coming here, we knew it was difficult. The number of people arriving at this camp and the pace of the needs…is outstripping the financial resources and response that we need to have. We are disturbed by the situation we find here, and our commitment is to urgently do even more,” she added.

The combination of extreme violence and severe drought has pushed up hunger levels in Somalia. To make things worse, this year the ripple effects of the war in Ukraine have driven up food and fuel prices to an all-time high for import-dependent Somalia.

Working closely with national and international NGO partners, the UN has reached some 4.14 million people with prioritized drought-response support. Humanitarian organizations are working hard to further scale up the response and to push further beyond displacement sites into rural areas, where needs may be even more acute.

World Vision’s Mark Smith noted the importance of working closely with NGOs as part of the effort to scale up, and with local organizations in particular. “The international system needs to do more to tap into and support the capacities of the diverse and highly competent pool of local partners here in Somalia,” he said. “Local networks and know-how are critical to extending our reach.”

However, shortages of resources and access challenges continue to inhibit efforts to keep pace with the rising level of needs. Somalia’s Humanitarian Response Plan seeks close to US$1.5 billion to support vulnerable Somalis this year, but so far contributions of just 42 percent have been reported against this.

During their visit, the EDG team noted that if this funding gap is not urgently addressed, the real risk of widespread famine may be inevitable.

FAO’s Director for Emergencies and Resilience, Rein Paulsen, explained: “We have urgent problems with funding and adequate attention, given the scale of the crisis. Since April last year and the failure of successive rains, we have been ringing the alarm bells for anticipatory action and early response, but it hasn’t happened at the levels needed. Vulnerable farmers are forced to move as livestock are dying and crops failing. Now everyone has to mobilize quickly and at scale.”

At the IDP camp, 80-year-old Fatuma Hussein told the EDG team of the critical hunger levels.

“We have no food or proper shelter here,” she said. “We are hungry and have not had a proper meal for a long time now. We are running all over the camp looking for help. Please, help us.”

Fatuma is one of about 7 million Somalis — close to half the population — facing crisis levels of food insecurity. Women, children, and the elderly have been particularly hard hit; they make up close to 90 percent of the more than 918,000 people displaced by the drought so far.

Access to food and milk is scarce due to rising food prices and livestock losses, and some 1.5 million Somali children face acute malnutrition through the end of this year.

​​OCHA’s Director of Operations, Ghada Eltahir Mudawi, said: “Families are coming [to the camp] on a weekly and daily basis, so we need to increase the capacity to be able to accommodate them and to provide the needed response.”

The worst drought in generations

We have no more time to lose to prevent millions of people from dying of hunger, and we need to act fast to save and protect lives and stabilize communities, livelihoods, and local markets.

UNDP’s Deputy Director of Crisis Bureau, George Conway, said: “We have talked to community members who say they have grandparents who have never seen anything like this. With the way the numbers of displaced are evolving very rapidly, it is probably the worst drought in generations.”

But he also noted: “Droughts in and of themselves do not cause famines…When you combine insecurity, violence, local governance failures, absence of service delivery systems, and lack of livelihood alternatives, all these things combined create the condition in which famine can happen. So, we have to work across all of those fronts.

A deep investment in climate change adaptation is going to be absolutely necessary over the next years.”