US envoy in Ethiopia to press peace efforts 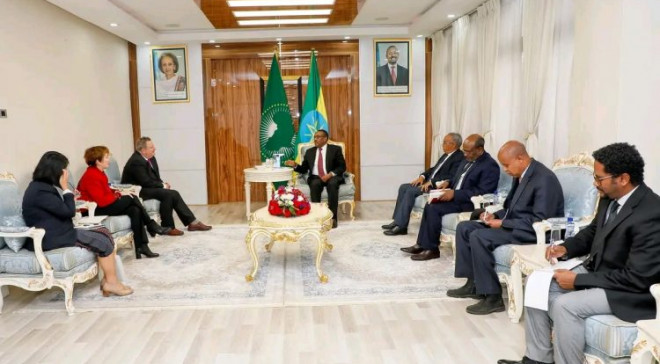 ADDIS ABABA - The new US envoy for the Horn of Africa arrived in Ethiopia on Friday on a mission to advance peace efforts between the government and Tigrayan rebels.

Mike Hammer is in the country "to support efforts towards achieving a lasting peace for the benefit of all Ethiopians", the US embassy said on Twitter.

It said he would meet government officials, political parties, and civil society.

Both the Ethiopian government of Prime Minister Abiy Ahmed and the Tigray People's Liberation Front (TPLF) who went to war in November 2020 have raised the possibility of peace talks.

Abiy wants the African Union, which is based in Addis Ababa, to broker any talks, a stance rejected by the rebels who instead want neighbouring Kenya to lead the mediation.

Hammer "will be having discussions with the parties to see what we can do to move forward on those talks", Molly Phee, the top US diplomat for Africa, said on Wednesday.

Abiy's national security adviser Redwan Hussein said on Twitter on Thursday that the government was ready to talk "anytime anywhere" and that negotiations should begin "without preconditions".

Fighting has eased in northern Ethiopia since a humanitarian truce was declared at the end of March.

But more than 13 million people are in need of food aid across Tigray and the neighbouring regions of Afar and Amhara, with high levels of food insecurity and malnutrition, according to the United Nations.

Tigray itself is lacking in food, fuel, and essential services such as electricity, communications, and banking, with hundreds of thousands living in dire conditions.

Earlier this week, TPLF-linked Tigrai TV quoted the rebels' leader Debretsion Gebremichael warning that basic services would have to be restored in the region before negotiations could begin.

The US State Department said in a statement Saturday announcing his visit that Hammer would "review progress on delivery of humanitarian assistance and accountability for human rights violations and abuses".

Hammer is also due to help forge a diplomatic resolution to the regional dispute over the Grand Ethiopian Renaissance Dam (GERD), a mega-project on the Blue Nile, it said.

He held talks on the dam during a visit to Egypt on Monday.

"We are actively engaged in supporting a diplomatic way forward under the African Union's auspices that arrive at an agreement that provides for the long-term needs of every citizen along the Nile."

Addis Ababa deems the project essential for the electrification and development of Africa's second most populous country, but Cairo and Khartoum fear it could threaten their access to vital Nile waters.