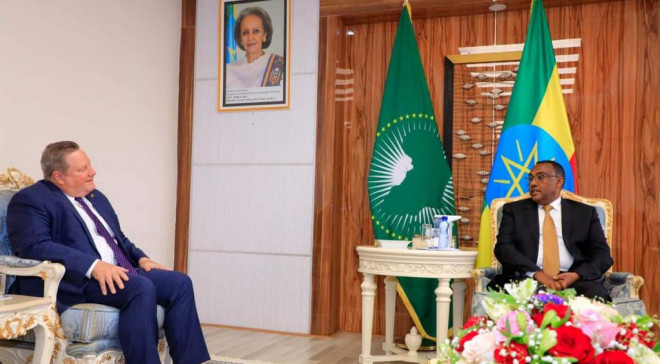 ADDIS ABABA — The new U.S. envoy for the Horn of Africa called Saturday for progress in holding Ethiopian peace talks and for unrestricted aid deliveries to stricken areas of the country.

Prime Minister Abiy Ahmed's government and the rival Tigray People's Liberation Front (TPLF) have both raised the prospect of peace talks to end the brutal conflict that erupted in November 2020.

But major obstacles have emerged, not least over who should mediate any negotiations.

Abiy wants the African Union, which is based in Addis Ababa, to broker any talks, while the TPLF is insisting that the negotiations are led by neighboring Kenya.

Abiy's national security adviser Redwan Hussein said on Twitter this week that the government was ready to talk "anytime anywhere" and that negotiations should begin "without preconditions."

Meanwhile, TPLF-linked Tigrai TV quoted the rebels' leader Debretsion Gebremichael warning that basic services would have to be restored in Tigray before negotiations could begin.

Fighting has eased in northern Ethiopia since a humanitarian truce was declared at the end of March, allowing the resumption of desperately needed aid convoys.

Untold numbers of people were killed in the war and the UN says more than 13 million people need food aid across Tigray and the neighboring regions of Afar and Amhara, with high levels of food insecurity and malnutrition.

Tigray itself is lacking in food, fuel, and essential services such as electricity, communications, and banking, with hundreds of thousands living in dire conditions because of what the United Nations has described as a de facto blockade.

The UN's humanitarian response agency OCHA said that since the resumption of humanitarian convoys on April 1, 4,308 trucks had arrived in Tigray's capital Mekele as of July 19.

On Friday, Egypt said it had protested to the U.N. Security Council against Ethiopian plans to fill the reservoir of the controversial dam for a third year without agreement from downstream countries.

The multi-billion-dollar GERD is set to be the largest hydroelectric scheme in Africa but has been at the center of a dispute with Egypt and Sudan ever since work began in 2011.

"We are actively engaged in supporting a diplomatic way forward under the African Union's auspices that arrive at an agreement that provides for the long-term needs of every citizen along the Nile," Hammer said on a visit to Egypt this week.

Addis Ababa deems the GERD essential for the electrification and development of Africa's second most populous country.

But Cairo and Khartoum fear it could threaten their access to vital Nile waters.