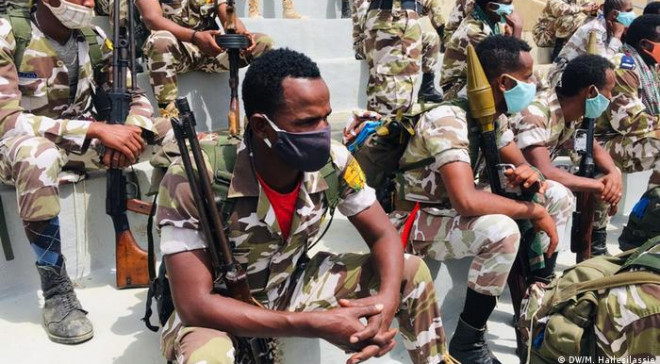 LONDON - The United Kingdom [UK] has intensified calls to have Eritrea's soldiers leave Ethiopia's troubled region of Tigray immediately, with Asmara maintaining that it has not participated in any manner within the Tigray region, as the war in northern Ethiopia entered the 23rd month.

In a candid statement, Vicky Ford, the minister for Development who previously served as UK minister for Africa, Caribbean, and South America, said there was a need for the Eritrean soldiers to leave Tigray a move which she says would give room for robust negotiations.

At a meeting with Ethiopia's Deputy Prime Minister Demeke Mekonen, Ms. Ford reiterated calls for a truce and restoration of humanitarian access to the Tigray region after reports suggested that after all, teams were not allowed into Tigray to help solve the humanitarian conflict.

"Important conversation with Ethiopian DPM Demeke Hasen yesterday. I expressed concern about the impact of renewed conflict on the humanitarian crisis in northern Ethiopia and reiterated calls for a truce, restoration of humanitarian access to Tigray, and for Eritrean forces to leave," she said.

Vicky Ford is the first senior government official in Britain to call for a ceasefire in the country despite earlier calls by the Ministry of Foreign Affairs. The United Kingdom and the US have been keenly following the situation in northern Ethiopia where thousands of people have died.

The Ethiopian National Army has been fighting with the Tigray People's Liberation Front [TPLF] but the latter claims Ethiopia was getting assistance from Asmara. The United Nations did confirm that indeed it had established that Eritrea was directly involved in the conflict.

Meskel Yemane, Eritrea's Minister of Information, dismissed the recent report by the UN Humanitarian team which maintained that soldiers from Asmara had camped in Western Tigray where they are unleashing on innocent civilians. Ethiopia has also been accused of bombing Mekelle.

The two parties have agreed to embrace the African Union-led mediation process but to date, they are yet to agree on terms and conditions. Kenya has asked former President Uhuru Kenyatta to take over the mediation process but he's yet to respond to the invitation by his successor William Ruto.