Nurses and midwives: The bridge between patients and health care 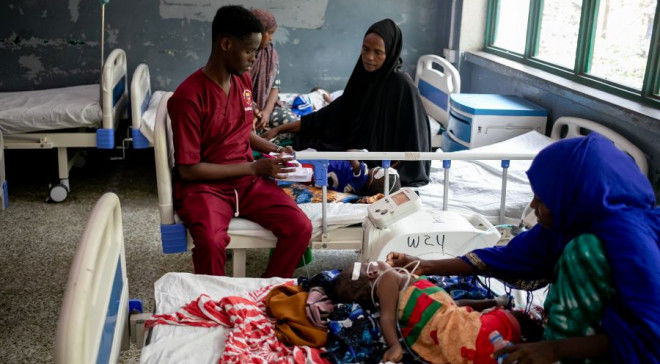 To celebrate International Nurses’ Day, marked around the world on Florence Nightingale’s birthday on 12 May, and International Midwives’ Day, which falls on 7 May, the World Health Organization (WHO) in Somalia is acknowledging the remarkable contribution of nurses and midwives in the country.

WHO spoke to 2 experts to hear about their experiences.

Omar Mohamed Abdi, a trained nurse by profession, also serves as the Head Anaesthetist at the Bosasso General Hospital. As part of his work, he prepares patients for surgery and teaches students anaesthesiology.

As a child, Omar wanted to join the health sector. He feels this was probably as, back then, many children didn’t know much about other careers. He just wanted to work hard like his father, a labourer who paints homes, and his mother, who worked at a livestock market. But most of all, Omar wanted to help his community and do as much as he could for them.

In the last 4 years at work though, Omar was surprised to learn how tough life can be for nurses. Very few people actually value the contribution of nurses, he says.

“Being a nurse is a noble profession – nurses are a bridge between a doctor and a patient,” says Omar, “but unfortunately, nurses are yet to receive the respect they deserve in the society. Generally, managers expect nurses to do odd jobs, switch their duties abruptly from one ward to another, and, on some occasions, discharge nurses very easily, which is difficult for their careers.”

Omar explains that life would be better for nurses if they had an association that could band them together and advocates for their basic rights. Without an association, it is hard to keep track of whether or not one is truly qualified as a nurse. On some occasions, people pretending to be nurses have actually neglected patients and caused them more damage, adds Omar, which gives nurses a bad reputation.

Nurses work really hard, are underpaid in Somalia, and hardly get opportunities to train and advance their skills, as not many people value them, adds Omar. He feels he was one of the lucky ones as, in January, he had the chance to participate in a training course in basic emergency care, organized by WHO. Jointly developed by WHO and the International Committee of the Red Cross (ICRC), endorsed by the International Federation for Emergency Medicine (IFEM), and certified and facilitated by the African Federation for Emergency Medicine (AFEM), this course was designed for frontline health care providers who manage acute life-threatening conditions with limited resources. However, nurses need more training like this, he adds.

Beaming with this news, 26-year-old Omar announces he has teamed up with some of his colleagues to change the status quo. They have created a nurses’ association in the Puntland State of Somalia, but need a lot of support from policy-makers and international and national organizations to be effective. For now, Omar hopes that in line with this year’s theme for International Nurses’ Day, the next generation of nurses becomes a voice to lead and a vision for future health care.

Strong-spirited midwives and nurses need to be updated, standard curricula

“To be a nurse and midwife means to be of service no matter what the circumstances are. However, people forget that nurses and midwives are not just health workers – they are mothers, sisters, and leaders in their communities, who need support,” says WHO’s Reproductive Health and Nursing and Midwifery Programme Officer based in Somaliland, Asia Osman Ahmed, fondly known as ‘Mama Asia’.

Mama Asia has been training midwives in Somaliland since 1996, but she emphasizes she feels like that is just a drop in the ocean. There is a need to keep training and overseeing the work of midwives, she says, and to update their curricula, so that every midwife knows exactly what she/he is doing when a mother seeks their support.

With limited resources, work has already been tough for Somali midwives, but the coronavirus disease (COVID-19) outbreak has made it even more challenging. Nurses and midwives continue to be on the front lines, trying to dodge the COVID-19 disease daily, and yet with limited personal protective equipment, they go out every day to provide essential health services.

When discussing the challenges that Somali women face, Mama Asia’s eyes well up. In the last week, Mama Asia witnessed yet another set of unbearable incidents. Young Deqo,* who had undergone female genital mutilation (FGM) as a child waited desperately at a health facility for help, as a traditional midwife who tried to open up Deqo’s stitches so that her husband could enjoy being intimate with her had cut up part of her rectum somehow and given her second-degree tears.

During her visits to mother and child health clinics, Mama Asia also came across Zahra,* who had just delivered a healthy baby boy. She watched in dismay as Zahra’s mother-in-law shamed her publicly for not being circumcised. In fact, she even named her grandchild ‘Ina Baro’, which means ‘child of one who is not circumcised.’ Mama Asia was happy to see Zahra stand strong and refuse to be circumcised after the delivery, despite the pressure her husband’s family put her through.

“WHO is going to develop the capacity of Somali midwives so they can stop the cultural practice of FGM in communities, and encourage facility-based births,” said Dr Al-Umra Umar, WHO’s Team Lead for Reproductive, Maternal, Neonatal, Child and Adolescent Health. “WHO will work with the Government to link community midwives to qualified midwives, who have been trained by partners such as the United Nations Populations Fund.”

Three decades after Somalia’s civil war, the country is still grappling with limited skilled personnel. The Somali Health and Demographic Survey 2020 states that only around one third (32%) of births in Somalia are delivered with the assistance of skilled health personnel (a doctor or clinical officer, or a nurse, midwife or auxiliary midwife), and only 21% of women visit health facilities for childbirth.

“Using skill-transfer projects like this, we can emphasize the importance of seeking health advice early in pregnancy, so childbirth is a safe experience for every mother, wherever she lives. At the same time, we will be expanding the knowledge of more people aspiring to be midwives and adding to the skilled health workforce,” adds Dr Al-Umra.

Despite the challenges faced, in the last 2 decades, Somalia has made some progress – the maternal mortality ratio has reduced by 31%, from 1210 deaths per 100 000 live births in 2000 to 829 deaths per 100 000 live births in 2017 and the number of skilled birth attendants increased from 22% in 2010 to an estimated 29% in 2017. However, there is more work to be done to ensure every mother can access health care at all times, especially as the COVID-19 outbreak has further reduced health access in urban areas by around 42%, according to a vulnerability assessment study conducted by the Horn Population Research and Development, with support from the United Nations Children’s Fund (UNICEF).

*names changed to protect the identity 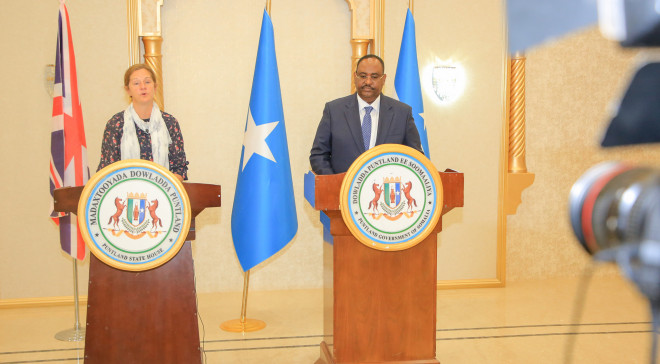 Ms. Foster also met with officials of the Transitional Puntland Electoral Commission (TPEC), congratulating them on the progress of the planned local elections.