NAIROBI, Kenya - A host of Puntland politicians, including former presidents and PM have backed a ceasefire in Bossaso city following a nearly two-day deadly gunfight that left at least 10 people dead and forced hundreds of families to flee their houses.

On Wednesday, the heavyweight leaders met in Nairobi, Kenya where they called on warring sides to cease the hostilities immediately and resolve the standoff over PSF leadership through peaceful dialogue.

They described the fighting and displacement in the city, Puntland's main commercial and economic hub as "unfortunate" and added that security is paramount in Puntland, which has long enjoyed peace and security more than any other Federal state in Somalia.

The fighting between Puntland government forces and soldiers loyal to the renegade ex-director of Puntland Security Forces [PSF] Mohamud Osman Diano came after in a bitter tussle for the last couple of months.

For the last two days, forces loyal to sacked PSF director and the Puntland government troops have been fighting for control of the counter-terrorism agency, with Puntland president Said Abdullahi Deni standing his ground to change its leadership as part of his security reform plan.

The leaders issued a key statement that encourages peaceful conflict resolution. In Nairobi, they supported a statement issued by the Puntland government on Wednesday which called for a ceasefire after a bloody confrontation.

They noted that an amicable solution for the current impasse could give a lifeline to the quagmire.

They called on rival sides in Bossaso to protect the peace, stability, and unity of the people of Puntland as well as cease the hostilities. Puntland was formed in 1998 and since then, it has remained relatively peaceful than other states.

In a statement issued later on Wednesday, sacked PSF director Mohamud Osman Diano accepted a ceasefire and talks to bring an end to the Bosaso war which is a setback to the upcoming Lower House election in the port city.

Diano said there was no reason for them to start firing and that they were ready for dialogue with the Puntland government. Earlier, they had accused government forces of storming their compound in Bossaso and firing indiscriminately.

But in return, the Puntland government accused PSF of getting support from the elite GorGor troops belonging to the government of Somalia led by the outgoing President Mohamed Abdullahi Farmaajo. The conflict started when Diano was fired by Deni on November 24 this year.

Watch below the press conference in Nairobi. 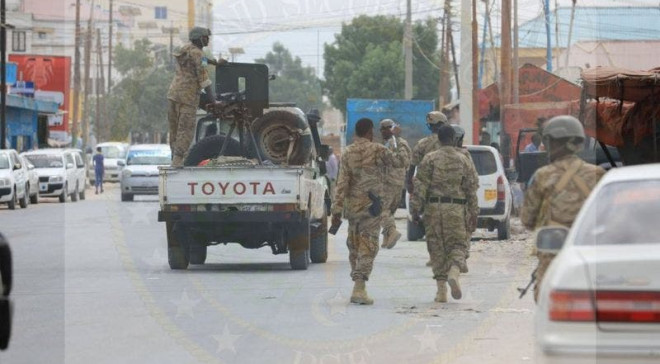