Al-Shabaab leader threatens electoral delegates ahead of the polls 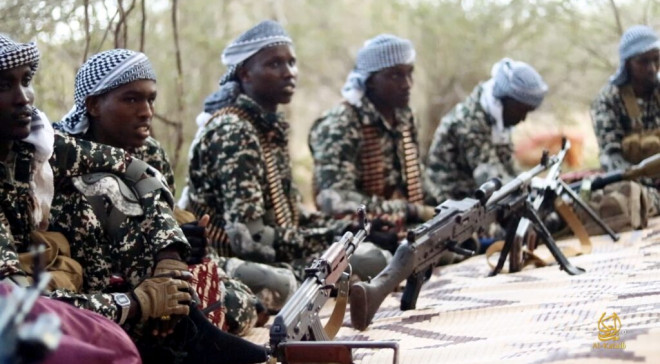 These are al-Shabaab fighters prepared for the November 2019 attack on a US military base in Beleddogle, Somalia [Photo Al-Shabaab media]

MOGADISHU, Somalia - The Al-Shabaab says it is monitoring the ongoing preparations for elections in Somalia, something which threatens the future of the Horn of Africa nation, which is still struggling with instability, over three decades after the ouster of the ex-central government.

Al-Shabaab, which controls large swathes of rural central and southern Somalia, has been battling to overthrow the fragile UN-backed Somalia administration through threats, cowardly attacks, and intimidation of senior officials and innocent civilians.

In recorded audio published by the group's media houses, Ahmed Omar alias Abu Ubaidah, the substantive Al-Shabaab leader, is heard purportedly threatening delegates who are set to participate in Somalia's elections that are due to kick off from July 25.

According to Ubaidah, whose whereabouts still remain unknown, Al-Shabaab opposes the process in "totality" given that it's "not transparent" and denies Somalis the right to "vote for the right leaders" in a free and fair exercise.

“They [leaders] will not be guaranteeing your safety,” he said in purported audio published by the militant media. It was his first speech in regard to upcoming polls, something which may lead to several questions about the safety of those casting votes.

The FMS parliaments are set to pick senators of the 54-seat Upper House this month before 27,775 electoral delegates representing Somali clans elect Members of Parliament. In early October, the MPs will choose parliamentary leadership who then choose a new president.

Outgoing President Mohamed Abdullahi Farmajo, whose term expired on Feb 8, is seeking to defend the seat but he's facing stiff competition. Among others, Farmajo will battle with former Presidents Sharif Sheikh Ahmed and Hassan Sheikh Mohamud along with former Prime Minister Hassan Ali Khaire among others.

Stakeholders have raised questions about the possible infiltration of Al-Shabaab in the exercise, something which may end up producing sympathizers or even Al-Shabaab members in the coming parliament. The vetting of delegates has been heightened.

Last week, the Jubaland state warned elders against associating with the group, arguing that those found culpable will be expunged from the delegates list. Somalia still practices indirect elections where elders have a huge role to play alongside their clans of origin.

It's unclear where or when Abu Ubaidah’s speech was recorded but he mentions the militant group’s attack on Bosaso prison in March, and the Somali parliament’s term extension in April, and the political stalemate that followed, tells a lot.

The group raided Bosaso prison in Puntland in March where a number of prisoners escaped. A month later, Farmaajo tried to extend his term in office but was outrightly rejected by various stakeholders, leading to a consensus meeting that paved way for elections.