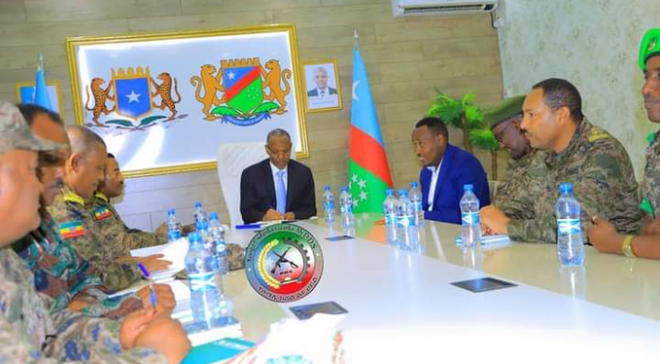 BAIDOA, Somalia - A fortnight after a series of Al-Shabaab unprecedented attacks within the territory of Ethiopia, Addis Ababa has dispatched a high-level military delegation to Somalia, paying a visit to border states, including HirShabelle, Jubaland, Somaliland, and Southwest states.

At Baidoa, the team was received by Sector III Commander within African Union Transition Mission in Somalia [ATMIS] Brigadier General Zewdu Setargie. The delegation briefed the Chief Commander about the current peace and security situation in the region and the general activities of Al-Shabaab militants.

Further, the army chiefs discussed a number of issues regarding cooperation on security and peace, with the defeat of Al-Shabaab militants being on the major agenda. Al-Shabaab has been making inroads within Ethiopia, with major attacks taking place two weeks ago.

At Jubaland, the delegation met with Vice President Mohamud Sayid Aden, where they condemned Al-Shabaab continued destruction of the economic and social progress of the country. The teams also discussed special cooperation between Jubaland and Ethiopia.

Brigadier General Lucas Kuto, on his part, said that decisive actions must be taken to prevent the terrorist Al-Shabaab from seizing and using various explosives and detonators, as well as from the chaos it was spreading using social media, Addis Ababa Standard reports.

Lieutenant colonel Sintayehu Leta commented that the militant group was deceiving the fathers, mothers, and community elders in the region and “taking their children and training them for their nefarious purposes”.

He emphasized that the militant group must be prevented from using especially the border areas of Dolo and Moyale to make incursions into Ethiopia.

Ethiopia said last week it had killed over 100 Al-Shabaab militants, but some reports indicated that over 200 militants may have crossed over the border. This was the first time the militants were raiding the Horn of Africa nation, which is struggling with instability.

However, despite their trip to Somalia, it's not clear whether Addis Ababa consulted Mogadishu before deploying the military delegation to Somalia. Ethiopia has been a major security stakeholder in Somalia, having contributed over 3,500 soldiers to the country.

Ethiopia had previously tried to use the breakaway region of Somaliland to create a buffer zone in the fight against Al-Shabaab militants in the country. Last week, the Ethiopian troops crossed into Somalia where they created a buffer zone last week.