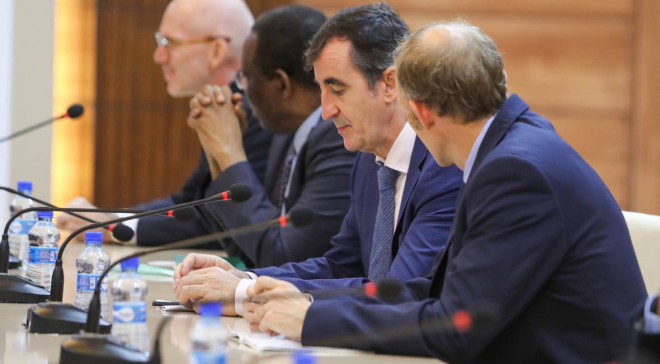 MOGADISHU, Somalia - A section of members of the international community has fired a warning to Somalia's politicians following Wednesday's collapse of the Afisyoni conference, which was meant to solve a host of pre-election challenges in the country.

Villa Somalia leadership had accused the federal states of Puntland and Jubaland of sabotaging the talks, arguing that the two parties were determined to erode gains made so far in holding the country's elections, which were supposed to start in December last year.

But in a rejoinder, Jubaland and Puntland distanced themselves from the said sabotage, adding that Villa Somalia was responsible for the stalemate. However, Garowe and Kismayo insisted that the talks had not collapsed, contrary to the statement released by the presidency.

Later, part of the international community, led by UN envoy to Somalia James Swan met presidents of three federal member states close to The Villa Somalia. The envoys told the leaders they will not accept the talks to collapse encouraging them to go back to Afisyone for dialogue.

Those they met include Ali Guudlaawe of Hirshabelle, Lafta-Gareen of Southwest, and Abdi Kaliye alias Qoor-Qoor of Galmadug. Prior to Wednesday's conference, a number of analysts had accused Qoor-Qoor, a close ally of outgoing President Mohamed Abdullahi Farmajo of being the stumbling block to the talks.

The representatives of the international community are set to meet presidents Said Abdullahi Deni of Puntland and Jubaland's Ahmed Islam Mohamed Madoobe today to push for an end to the current political impasse.

The international partners and other stakeholders are expected to register their displeasure, with all the parties, in the casual manner these crucial talks have been treated and abandoned. Sources told Garowe Online the talks will resume with tougher conditions from the international community.