Kenya loses maritime border dispute with Somalia at The Hague 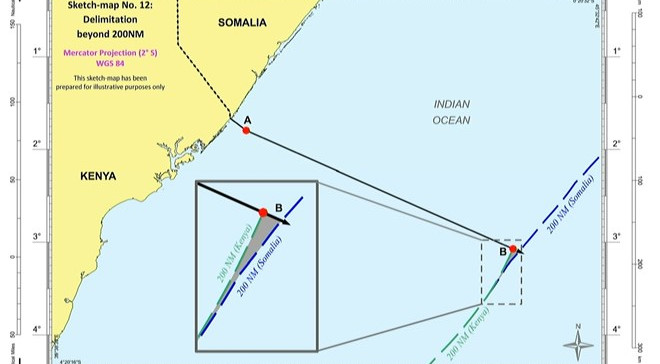 THE HAGUE - Somalia will be the biggest beneficiary of the judgment on the maritime border dispute which was delivered on Tuesday by the International Court of Justice [ICJ] at The Hague, something which could trigger animosity between the two countries.

Although Kenya had withdrawn from the case recently accusing ICJ of bias, the court went on to deliver a detailed judgment, in which Somalia appears to be the biggest winner, but obviously, did not have some of the claims admitted.

In a partially parked court, presiding Judge Joan E. Donoghue, read the lengthy judgment for over one hour but it was evident that Kenya didn't have a representative. Somalia was represented by a number of people, key among them Deputy Prime Minister Mahdi Gulaid.

Most judges were of the opinion that q fair share of the disputed area belongs to Somalia and it's this boundary that has been in question. Kenya had argued that its border should extend from the land straight to the deep seas contrary to expectations of Somalia.

The court [10-6] agreed that the maritime border between Kenya and Somalia should be split, with each side gaining part of the disputed triangle. Previously, Somalia did not have access to the disputed area and it's this reason it went to court in 2014.

Also, the court rejected Kenya's argument of a pre-existing agreement with Somalia on a parallel boundary along the latitude. This was contained in Kenya's argument that Somalia has vehemently rejected throughout the sessions at The Hague.

Consequently, the International Court of Justice established there is a maritime boundary dispute between Kenya and Somalia and sets out to define the boundary using beacons set in a 1934 treaty agreement between the colonial powers, Italy and Britain, pursuant to international laws and conventions.

In addition, the court established that Somalia's claims that Kenya had violated International Laws were untrue, thus ruling against the federal republic of Somalia. The existing claims, the court added, will be effectively be affected by Tuesday's ruling.

The Indian Ocean maritime border row has frequently strained relationships between the two countries but it's not immediately clear if Kenya will impose sanctions on Somalia based on the ruling. Nairobi had indicated that it will not respect the court's ruling.

There have been attempts to have the matter settled out of the court but Somalia was reluctant despite willingness by Kenya. The African Union was pushing for the settlement but Mogadishu insisted that "we trust ICJ as an independent arbiter".

In recent months, the two nations have been wrangling over a host of issues, including but not limited to the boundary dispute. Qatar offered to mediate, leading to Kenya's decision to lift the suspension imposed on flights from Somalia.

Former President Hassan Sheikh Mohamud was instrumental in the case, which saw Kenya ask for postponement for a couple of months. The hearing took place in March 2021 after ICJ rejected Kenya's push for another postponement.