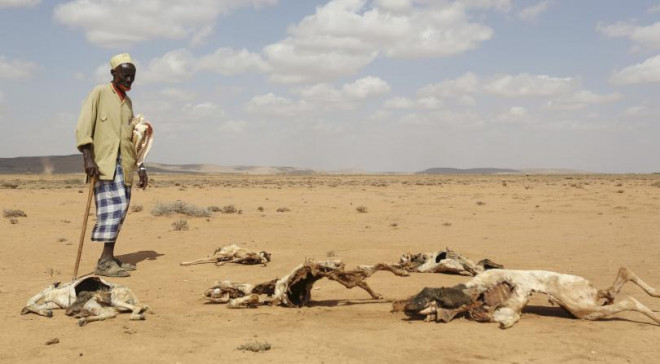 A man stares at his dead livestock during the 2011 famine. [Photo: Internet]

MOGADISHU, Somalia - At least five people have reportedly died in Gedo, Jubaland following the ongoing hunger precipitated by drought after rains failed for the third time in Somalia, a country also struggling with myriad challenges.

According to Ali Kadiye Ahmed, the district commissioner, quite a number of deaths may have not been confirmed by the government but authorities can confirm five deaths following starvation and thirst in the region, especially in the Luuq area,

District commissioner, Ali Kadiye Ahmed said deaths linked to hunger have been reported in the vicinity of Luuq where three people including two children died. He was giving daily briefs about the situation.

He said the three died while heading to Luuq. He described the drought situation as dire and called for urgent distribution of relief food to avert more deaths.

“Three people have died the families living between Garbaharey and Luuq are suffering from a severe drought that has seriously affected their livelihoods. These families need immediate assistance,” Luuq district commissioner, Ali Kadiye said.

According to the UN about 2.3 million people already suffering from serious water, food, and pasture shortages in Somalia, a rapidly worsening drought could lead to an “extreme situation” by April next year.

Across the country, the number of people who need assistance and protection is forecast to rise by 30 percent, from 5.9 million to about 7.7 million in 2022. Over 70 percent of all Somalis live below the poverty line.

Food and Agriculture Organization [FAO] said it needs close to $4 million to mitigate the ongoing hunger in the country. The United Nations, a major financial partner of the Horn of Africa nation, is yet to release the funds.

Later on, and for the sake of reconciliation, the government will engage the militants for formalized talks, he added.

Uganda to reduce UPDF troops in Somalia amid Al-Shabaab crackdown

Somalia: We can’t give Robow weapons and ask him to fight, says president