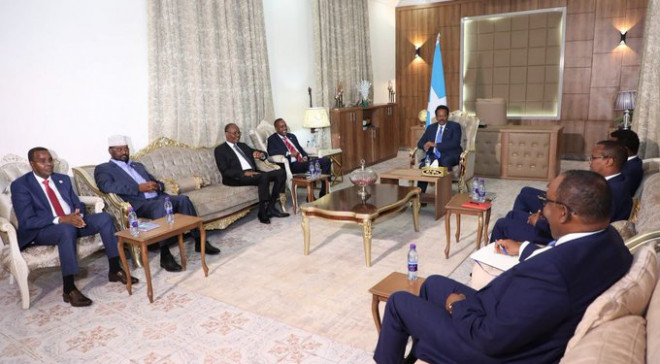 MOGADISHU, Somalia - It might after all take some time before Somalia's fragile democracy finds a key to the current electoral impasse, following the collapse of the talks in Afisiyooni Center, which were brokered by members of the international community.

There were glimpses of hope on Wednesday morning when outgoing President Mohamed Abdullahi Farmajo and his team made their way to the center, only for the team to fail to reach a tangible agreement.

Apart from the governor of Banadir Omar Filish, the leadership of Hirshabelle, Southwest, and Galmadug, the presidents of Jubaland and Puntland were too present. Presidents Ahmed Madobe and Said Abdullahi Deni have spent over three weeks in Mogadishu.

But in a swift change of events, Somalia's outgoing Information minister Osman Dubbe said Jubaland and Puntland presidents are "responsible" for the failure of the electoral talks in Mogadishu, leading to an imminent collapse of the conference.

While giving the chronology of events, Abdirashid M. Hashi, the Director of Communications in Villa Somalia, also blamed Jubaland and Puntland leadership for the current electoral impasse, which risks plunging the country into a deadly civil war.

In a premeditated statement, Hashi, who speaks on behalf of Farmajo, said Villa Somalia has been determined to hold universal suffrage polls before yielding to the demands of the improved clan-based model, adding that all the efforts have, however, been thwarted by Jubaland and Puntland.

"Whereas Somaliland, South-West, Hirshabeele, and Galmudug nominated State-Level Election Implementation Committees for smooth facilitation of the Federal Level elections, Jubaland and Putland became a stumbling block by failing to propose or forward names of their election teams," he said in one of the texts.

"Jubaland and Puntland Leadership continued to hold Somalia in Ransom by ignoring Baidoa technical committee recommendations and boycotting several elections Summits called by H.E Farmaajo causing all the efforts to resolve the elections impasse hit a snag without any progress," he added.

According to him, Villa Somalia was keen to have September 17 pre-election deal implemented before Jubaland and Puntland "spoilt" the plan. He further notes that the country's leadership has been tolerant to allow talks, which have been "sabotaged" by the two Federal States.

To appease the international community which has been pushing for the implementation of the previous agreements, Hashi asked the team to continue believing in Villa Somalia, just like the citizens of the Horn of Africa nation.

"We thank our beloved citizens for their patience and belief as the govt worked round the clock to provide all necessary support, security, and cooperation to take Somalia to elections. We also thank our partners for their unwavering support towards a peaceful and progressive Somalia."

But until now, Jubaland and Puntland are yet to issue a comprehensive statement with regard to the stalemate. However, the two states were categorical that the Feb 19 shooting in Mogadishu and the legitimacy of Farmajo be included in the agenda, something which was reportedly opposed by the government.

On Tuesday, the US vowed to punish any party that could engineer a stalemate in the talks. The opposition team has also been calling for more inclusivity, including getting them on board and the leaders of the civil rights groups and other stakeholders.