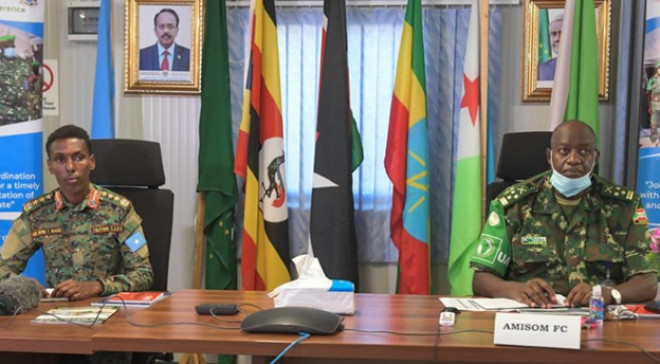 MOGADISHU, Somalia - A dispute has erupted between the Somali National Army [SNA] and the Africa Union Mission Forces [AMISOM] in Somalia, the Voice of America reports, in what could potentially ruin the gains made so far in the fight against Al-Shabaab militants.

The SNA chief has raised a lot of questions over the commitment of the African Union troops to fight against Al-Shabaab as they have been serving in Somalia since 2007.

In the July 4 letter, VOA reveals, Odowaa, who was elevated into the rank in 2019 by outgoing President Farmaajo, told Madeira that Ndegeya's remarks did not paint a good picture of the situation on the ground and were meant to cover up for the Burundian army's failure to fight Al-Shabaab.

AMISOM is under Lt. Ndegeya, who took over as Force Commander this year and comes from Burundi. Gen Odowa blamed the Burundian troops for being "lazy" adding that "they do not want to help us in the fight against Al-Shabaab.

But Lt. Gen Ndegeya accused Odowaa of planning and executing the operation himself, adding that it's when he failed, he asked for AMISOM support, which was rejected. But SNA claims the operation succeeded without AMISOM input.

Besides accusing the Burundian contingent of laziness, the Somali army boss also claimed the troops were fetching water from an area located 13 KM from their bases using a helicopter instead of reopening roads blocked by Al-Shabaab.

This is the first major criticism from a top Somali military official directed to AMISOM, which has largely been behind the law and order in the country. AMISOM was first dispatched in 2009 to help in the fight against Al-Shabaab besides promoting peace in the country.

According to multiple sources, the dispute has been occasioned by miscommunication and lack of proper coordination between the SNA forces and the AMISOM team during military operations in Middle Shabelle which were concluded a fortnight ago.

General Odowaa Yusuf Rageh coordinated the crackdown himself, breaking the military protocols that have existed for decades. The operation left close to 100 Al-Shabaab militants dead, with dozens of others arrested, security officials confirmed.

In addition, the operation, which AMISOM did not take part in, lead to the destruction of several Al-Shabaab bases in Somalia besides seizing of strategic towns from the militants. The SNA force called off the operations about two weeks ago terming it "successful".

A top AMISOM official said SNA officers didn’t inform them on plans of the operations but the African force is yet to make a formal statement. However, SNA says the operation succeeded without AMISOM, accusing them of being "disinterested" in the fight against Al-Shabaab.

However, A military spokesman denied there was a dispute between Odowa and the AMISOM commander.

Currently, there are close to 22,000 AMISOM troops in Somalia whose mandate could expire in December upon full implementation of the Somali Transition Plan [STP]. The Somali forces are expected to take over security responsibilities from the AMISOM.

However, a recent report published by the AU independent mission established dangers of withdrawing from Somalia, subsequently, giving four major recommendations. Three of the recommendations suggested rebranding of AMISOM while the fourth option preferred exit from the country.

The Somali government has since criticized the report, arguing that the AMISOM troops should exit in the coming months. Some of the force contributing nations include Kenya, Djibouti, Ethiopia, Uganda, and Burundi.

The revelation comes just hours after the US Africa Command launched the first airstrike under the administration of President Joe Biden. Pentagon confirmed the strike in Galkayo, Mudug region but did not give an assessment, adding that "the airstrike targeted Al-Shabaab who were fighting Danab commandos".

But according to senior military officials within the SNA, the airstrike in Caad village, north of Ba'adweyn in Mudug, left at least 50 Al-Shabaab militants dead. Out of the dead militants, officials said, three of them were foreigners but their nationalities haven't been disclosed.