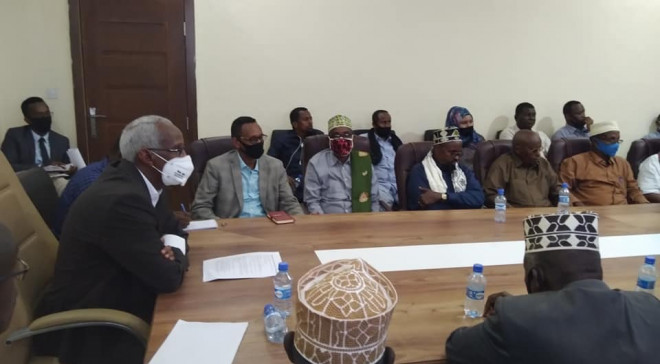 MOGADISHU, Somalia - A group of clan elders and politicians on Tuesday met the Federal Government of Somalia's minister for Interior, Federalism, and Reconciliation, in what could change the political dynamics of the western state of Somalia.

The team held a meeting with General Mukhtar Hussein Afrah, who is also a close associate of the outgoing President Mohamed Abdullahi Farmajo, who is under pressure to cede power, after the expiry of his term on Feb 8 this year.

"Minister of Interior, Federalism and Reconciliation FGS, General Mukhtar Hussein Afrah, held a meeting in his office today with the Clan Elders of Jubbaland and politicians from the Jubbaland State," the ministry said in a statement.

According to the interior and coordination department, the elders raised complaints about the formation and structure of Jubaland, adding that they were dissatisfied with the current administration of the Puntland state.

"Traditional elders and Politicians from Jubaland have submitted complaints to the Minister about the formation and structure of the Jubaland State. They also expressed dissatisfaction with the Jubaland Administration as a whole," it added.

"Finally, Minister Mukhtar listened to the grievances of the elders of the Jubaland communities and the politicians who accompanied them to the meeting," the ministry further noted, in what was an indirect jibe against the government of Jubaland.

Jubaland President Ahmed Islam Mohamed Madobe has been critical of the federal government and has been persistent that the current electoral impasse in the country should be solved by first defining the legitimacy of the current administration.

The meeting comes at a time when Madobe is part of the leaders of the federal states in Mogadishu for weeks in an effort to end the electoral stalemate in Somalia.