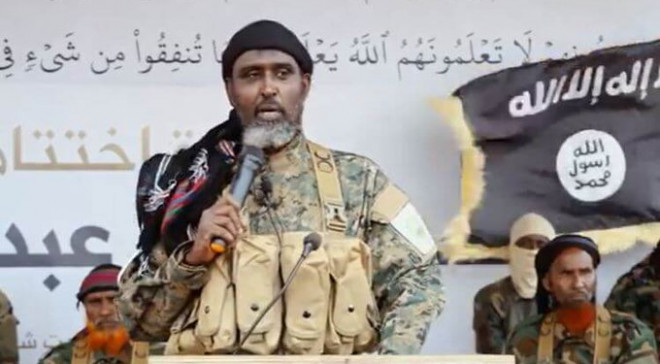 MOGADISHU, Somalia - Al-Shabaab militants have been photographed and video-graphed in a graduation ceremony, with the group's top brass seizing the opportunity to fire warnings at President Hassan Sheikh Mohamud, whose strategy to defeat the militants seems to be winning many hearts.

During the event, a number of senior Al-Shabaab officials attended the graduation.

While addressing the recruits, Al-Shabaab spokesperson Ali Dheere condemned the current situation in Somalia and the entire leadership, insisting that there is a need for change. The brigade is known for suicide bombing and making explosives that are used in suicidal attacks.

The spokesperson also took a jibe at President Hassan Sheikh Mohamud who he claimed was targeting Al-Shabaab courts in the Horn of Africa nation. Further, he dismissed AMISOM's decision to change the name to ATMIS, suggesting that the mission team had lost track.

In addition, Ali Rage laid out Al-Shabaab's view on the reason foreign forces are meddling in Somalia's affairs and the role of domestic "apostate clients;" He alleged that President Hassan Sheikh Mohamud is just the latest client selected by this foreign conspiracy.

Further, repeats the group's warning to Somali civilians to "stay away" from government forces and buildings as well as other "legitimate" targets. Rage also issues a threatening warning to Somalia's clans that have taken up arms against Al-Shabaab.

Al-Shabaab has issued the threat after facing military pressure from Somali forces backed by a local militia on several fronts in central Somalia, where the combined troops regained control of large swathes and killed dozens of militants since early this month.

After issuing multiple threats to a wide swath of Somali domestic society and the diaspora, Al-Shabaab's Ali Rage [Ali Dheere] turns to discuss the insurgents' claims about their drought relief and other humanitarian aid delivery campaigns.

Details about the graduation event come at the time Somali residents have taken arms against Al-Shabaab, combining efforts with government forces who have been fighting the group for months. Over the weekend, the group lost over 75 fighters according to the state media.