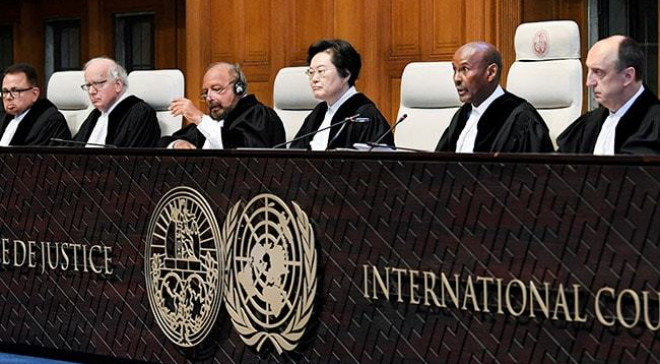 HAGUE - A delegation led by Deputy Prime Minister Mahdi Gulaid has arrived at the International Court of Justice at The Hague on Saturday where they are expected to attend a court session in which a judgment on a border row with Kenya will be delivered.

Mahdi Gulaid has been consistent in the case and has rarely missed hearing in the past. Earlier this year, said, "Somalia does not have business in withdrawing, we shall push to the end." He further said, " We shall respect the judgment once it's delivered".

But throughout this time, Mogadishu has insisted on the International Court of Justice [ICJ] which it terms as a "fair arbiter" of the matter. Kenya had the case postponed on more than two occasions, citing the change of legal experts and the COVID-19 pandemic.

However, in March 2021, ICJ pushed for the case by receiving submissions from both parties and is set to deliver a judgment tomorrow [October 12]. The judgment could be historic since it can have significant ramifications within the region.

While Somalia wants the Indian Ocean maritime border to be diagonal, Kenya wants it to remain straight to the international waters. The border is said to be rich in hydrocarbons, which is the source of conflict between the two nations.

Kenya out of the case

Even before the judgment is delivered tomorrow, Kenya has withdrawn from the matter, arguing that ICJ lacks jurisdiction to hear the case. The statement was delivered last week by the Ministry of Foreign Affairs.

Nairobi said the court does not have powers to subject it to a tribunal without its express consent, noting that such a move is detrimental to its territorial integrity and sovereignty. The East Africa nation also stated that it had withdrawn from the matter.

"Kenya on September 24, 2021, joined other members of the UN in withdrawing its recognition of the International Court of Justice compulsory jurisdiction. As a sovereign nation, Kenya shall no longer be subjected to an international court or tribunal without its express consent," read the statement.

"Kenya recognizes and has consistently indicated as much, that the Judgement of the Court – whichever way – will have profound security, political, social and economic ramifications in the region and beyond," it further stated.

However, Nairobi urged all citizens to remain calm as the court issues judgment from the Hague. It's not clear if Kenya's representatives will be going to The Hague despite the fact that it has formally withdrawn from the matter.

"Every Kenyan is to be assured that the Government is fully seized of this matter. Kenyans are therefore called upon to remain calm before, during, and after the delivery of the Judgment," read the statement.

With Kenya officially out of the case, Somalia is expected to receive the document on the ruling, possibly act on it. Already, Mogadishu maintains that it will respect the outcome of the ruling, adding that "we have faith in ICJ".

The relationship between the two countries has struggled for a couple of years under the reign of outgoing President Mohamed Abdullahi Farmaajo, who is quite unpopular in Nairobi, at least based on the number of engagements.

Besides the border row, Somalia has been accusing Kenya of interfering with her internal affairs, citing the administration of Jubaland as the main center of the conflict. Jubaland President Ahmed Madobe works closely with Kenya.

In fact, it's only in May Qatar reached out to the two countries asking them to restore their relationship. The ties were normalized months after Kenya banned direct flights to Aden Adde International Airport in Mogadishu.

Also, Somalia has banned the importation of Khat [Miraa] from Kenya which is a major source of income in the East Africa nation. This is also said to have angered Kenya, leading to the banning of flights, which have since been lifted by Kenya.

Experts argue that the judgment could shape the relationship between the two nations; by either uniting or destroying the already fragile relationship. Kenya has been a key security partner of Somalia.

For instance, there are close to 3500 soldiers from the Kenya Defense Forces [KDF] who are serving in AMISOM. It's not clear whether they will continue staying in Somalia for the fight against Al-Shabaab should the ruling favor the Horn of Africa nation.