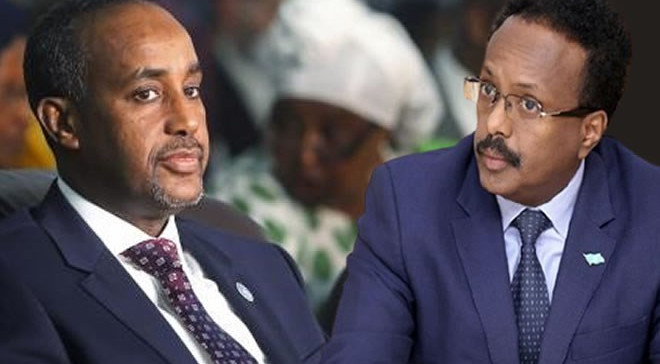 MOGADISHU, Somalia - Prime Minister Mohamed Hussein Roble failed to reach an agreement with Farmaajo in their first-ever meeting amid the fallout, sources have revealed, in a meeting which was brokered by two regional leaders.

The two leaders who are allied to Villa Somalia are said to have been concerned with the much-publicized fallout between PM Roble and Farmaajo, which threatens the country's unity. The two leaders have been wrangling over matters relating to the security of the country.

According to multiple sources, a meeting that was attended by the four leaders did yield an understanding of the issues that have caused divisions among them, including the murder case of Ikran Tahlil, a spy agency employee.

The latest reports from Villa Somalia indicate that Lafta-Gareen and Qooqoor proceed with the mediation as they try to find a way out of the standoff that is affecting the electoral process spearheaded by Roble.

Tahlil, who worked with the National Intelligence and Security Agency [NISA] was pronounced dead last week after two months of search, in what NISA blamed on Al-Shabaab militants. The Al-Qaida linked group has since dissociated itself from the murder.

In papers filed at the court, Ms. Mohamud accuses former NISA boss Fahad Yasin of orchestrating the murder, also dragging three others to the matter. She claims Yasin was in contact with Ikran Tahlil until her murder.

Even after PM Roble sacked NISA boss Fahad Yasin, Farmaajo immediately moved him to Villa Somalia where he named him as the National Security Advisor, a move that angered Roble, who has been pushing for justice for the bereaved family.

Previously, Roble has accused Farmaajo of blocking investigations into the mysterious murder, after rejecting a number of changes in the security sector. But Villa Somalia has persistently rejected the allegations, insisting that it keeps cooperating.

An ad-hoc committee was formed comprising of four members. Somalia's Min. of Education and Dep. Min. of information will represent PM Roble while Farmaajo is represented by Ex-MP Abdishakur Mire and Galmudug's Min. of Post and Telecom, per Source.