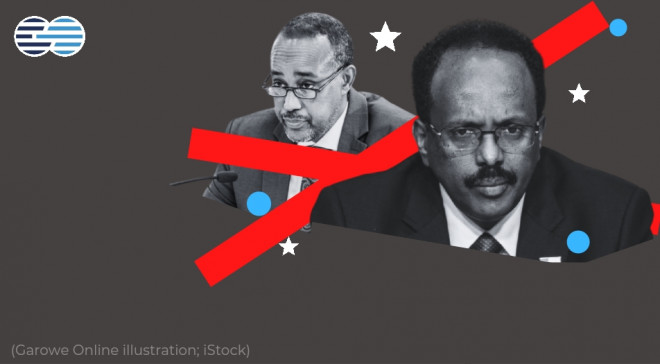 MOGADISHU, Somalia - Differences between outgoing President Mohamed Abdullahi Farmaajo and Prime Minister Mohamed Hussein Roble widened on Monday over embattled spy chief Fahad Yasin, who has now been placed at the center stage on the death of a junior officer.

On Sunday, a furious Roble suspended Yasin, an associate of President Mohamed Abdullahi Farmaajo, over the unanswered mysterious death of Ikran Tahlil, who previously worked as cyber security expert within the National Intelligence Security Agency [NISA]

Earlier, Roble had given Yasin 48 hours to issue a comprehensive report on the death, which has caused ripples in the country. But moments later, Yasin responded by asking Farmaajo to convene an emergency National Security Council meeting in what seemed to be defiance to Prime Minister Roble.

In a statement issued by Villa Somalia, President Mohamed Abdullahi Farmaajo defended Yasin, insisting that "I have full confidence in you, it's my humble request that you continue discharging your duties as the Director NISA, that is my correct position."

This now becomes the latest wide crack between the president and the PM, who have lately strained relationships. Although such damages have been manifested previously, for instance, when Roble sacked two NISA agents only for Yasin to reinstate them under controversial circumstances, the PM has often denied having issues with Farmaajo.

President Farmaajo appointed Fahad Yasin, but he can be suspended by the PM or Cabinet subject to an investigation because he is not an army chief, one observer argues. Mohamed Roble also cites Farmaajo speech transferring election security responsibilities to him in his latest statement.

After the purported suspension of Fahad Yasin, Roble appointed a former chief of NISA, Lieutenant General Bashir Mohamed Jama as the caretaker intelligence director. He insisted that Yasin should take responsibility for the death of the junior officer.

The Somali Prime Minister Mohamed Hussein Roble had also earlier asked Attorney General Suleyman Mohamed to open an official investigation into the mysterious death of Ikran Tahlil Farah and take the case to the appropriate court.

But it's the looming constitutional crisis that would again raise questions about the powers of the president and the PM, with both claiming stakes in the matter. The two have been tussling over control of serious institutions.

Ikran Tahlil disappeared in June, but since then, authorities in Somalia had remained silent until last week, when Yasin blamed Al-Shabaab for abduction and subsequent murder. This came after Tahlil's mother, Qali Mohamud, asked Roble to intervene and help her trace the officer.

Already, Al-Shabaab has denied any involvement, accusing the government of peddling "petty claims our us." Footage obtained earlier showed the agent being bundled into a waiting car, which is believed to be owned by the agency, and since then, she has never been traced.

It's not clear why Farmaajo and Yasin waited for the PM to firmly talk about the matter before reacting. A few months ago, Farmaajo had handed over security responsibilities and preparation of elections to Roble, who is barely a year in office.

There are claims that Ikran Tahlil had privy intelligence of thousands of Somali soldiers training in Eritrea in what many observers termed as a clandestine move. Although the government had initially denied this, it would later admit that, indeed, close to 5,000 troops were training in Asmara.

Yasin had been instrumental in Farmaajo's plans to continue holding into power. Still, the matter was quelled after Roble was given abilities to plan elections and even taking charge of security in the country. This appears to have created divisions between the two entities.