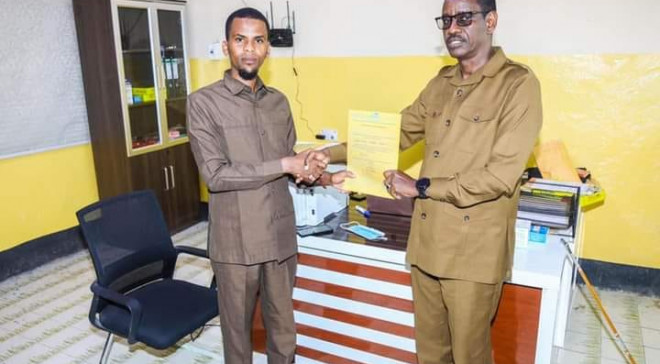 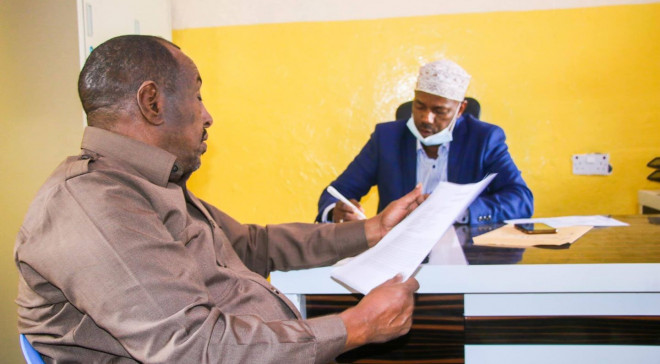 The candidates showed up at the office of the State electoral team's office in Kismayo for registration [Photo: Jubaland state]

KISMAYO, Somalia - Jubaland has become the first state in Somalia to show goodwill in implementing the May 27, 2021, electoral agreement, possibly paving way for other states to unlock the impasse, which threatens the country's future in terms of stability.

The southern Somali Federal State's electoral body began registration of the senatorial candidates vying for four seats, a day before the Upper House election in Kismayo city slated for July 29. Every candidate running for a Senate seat required to pay a $20,000 registration

The country was set to hold elections from July 25 but the exercise has been delayed since most states had not adequately prepared, further raising doubts about the possibility of the country holding polls as scheduled.

But on Tuesday, Jubaland, which had major differences with the federal government, announced candidates for senatorial polls, ending the wait. The state is set to have eight senators but only four candidates have been announced.

Candidates will speak before the Jubaland parliament on July 29, following the election on the same day. The winners will represent Jubaland in Mogadishu where they will take charge of FMS-FGS-related legislations, especially on resource allocations.

"The election of the members of the Upper House of the Somali Federal Parliament by the Jubaland State Regional Assembly will start on Thursday, 29 July 2021," Jubaland said in a statement, Tuesday.

Through his office, Prime Minister Mohamed Hussein Roble praised Jubaland for submitting the list of the senatorial candidates and subsequent announcement of the election dates, urging the remaining four Federal states to expedite the process to start the parliamentary election in Somalia.

Roble visited Jubaland a few weeks ago where he solved the long-standing crisis in Gedo, where the federal government was accused of interference. The region is set to participate in the elections as opposed to previous tough statements from Jubaland.

Three out of the four nominees are ex-senators, including Fartag and Iftin Baasto who are seeking re-election. The state has eight members in the Upper House, 4 four are yet to be announced but it's expected they will be unveiled very soon.

FMS parliaments will pick the 54 seats of Somalia's Senate and Lower House MPs will be elected by 27,775 clan delegates. After the MPs are elected, they will thereafter elect the president on October 10 based on the elections schedule which was released a few months ago.

Outgoing President Mohamed Abdullahi Farmaajo will be battling with among other, former Presidents Sharif Sheikh Ahmed and Hassan Sheikh Mohamud along with former Prime Minister Hassan Ali Khaire. However, the team may also opt for a single candidate.