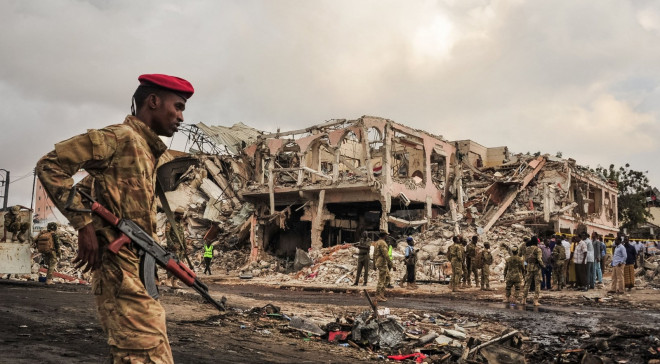 Many people were killed and roughly 300 more injured in the attack in Mogadishu. GETTY IMAGES

MOGADISHU, Somalia - Somalia is today marking the 4th anniversary of Mogadishu's deadly bomb blast, which left nearly 1000 people dead, an incident that remains probably the worst terror attack in the Horn of Africa nation, which is struggling with instability.

In commemoration of this incident, Somalia declared October 14 as a national remembrance day for the victims of terror attacks in the country. The event is held every 14th October since 2017.

Memories of the bombing are still raw in a country that has faced decades of deadly warlord-led chaos and attacks by the al-Qaida-linked al-Shabaab extremist group. The Oct. 14, 2017 bombing was so devastating that al-Shabaab never claimed responsibility amid local outrage.

In 2018, the new U.N. envoy to Somalia, Nicholas Haysom, who would later be replaced by James Swan, called it “the deadliest ever terrorist attack in Africa, and such terrorist attacks amount to a war crime.”

“In my mind, it feels like it has happened just yesterday,” said Sadiya Mohamed, a 49-year-old who lost her eldest son. He is among hundreds of people still missing. “I can barely get sleep since that dark day. He was everything for us,” she said.

Somalis now look to the future with a mixture of sorrow and hope.

Many believe the global attention to the attack and outpouring of grief should bring much-needed assistance for the fragile central government and security forces, who in the next few years are expected to take over the country’s security from African Union peacekeepers.

“That was a big test for the international community’s seriousness in helping Somalia to move forward,” said Ahmed Mohamed, a former lawmaker.

In 2018, a man convicted of involvement in the deadliest bomb attack in Somalia's history has been executed on the first anniversary of the blast. Hassan Adan Isak drove one of the vehicles involved in the attack on the capital, Mogadishu, a court ruled.

Nearly one thousand people were killed when a truck filled with 1,200Kg explosives was detonated at one of the busiest intersections in the city. It has been renamed 14 October junction in memory of those who died there.

No group ever claimed responsibility for the attack, although correspondents say all indications are that the militant Islamist al-Shabab group was responsible. The militants still control large swathes of rural central and southern Somalia.

The 4th anniversary of the Zoobe truck bombing comes amid a political and election crisis in Somalia as the country misses three times its vote deadlines which raised uncertainty about the future.

The outgoing President Mohamed Abdullahi Farmaajo was accused of incompetence and poor leadership as the Oct 14 attack is attributed to lax security. Somalia is yet to win the war against Al-Shabaab but significant strides have been made.