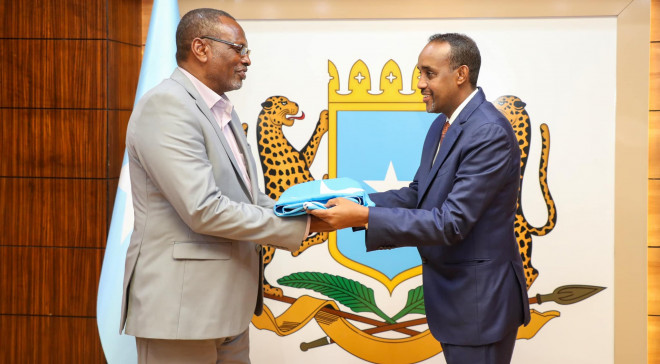 MOGADISHU, Somalia - Somalia Prime Minister Mohamed Hussein Roble has formally apologized to the estranged commander of Ogaden National Liberation Front [ONLF], a military-political faction that has been operating in Eastern Ethiopia within the Somali region.

In what seemed to be an "honest" reconciliation reunion, Roble, who is now credited for successfully holding elections in Somalia, welcomed Abdikarim Qalbi-Dhagah to his office for the historical reunion.

“Honoured to welcome to my office Abdikarin [Qalbi-Dhagax], a Somali hero and a former army officer. On behalf of our Nation, I once again apologize to him for being treacherously handed over to a foreign country, to atone for misdeeds of the previous administration," Roble said.

"This is the very same room where the decision to rendition him [Qalbi Dhagah] to a foreign country was made," added Roble, who also acknowledged Abdikarim Qalbi-Dhagah's contributions to the Somali National Army [SNA].

At Aden Adde International Airport earlier, top government officials led by ministers and other dignitaries ushered in the ONLF commander, who was flown out of the country through the same airport while blindfolded by authorities in Mogadishu over five years ago.

In January this year, the Somali cabinet officially apologized to Qalbi Dhagah, revoked a September 2017 decision by the previous cabinet led by Hassan Ali Khaire to label ONLF as a "terrorist" organization; and declared the rendition illegal. Khaire, who has since fallen out with Mohamed Abdullahi Farmajo, is running for the presidency.

The ONLF, an outfit that has been at loggerheads with Addis Ababa, is still labeled a terrorist organization by the government of Prime Minister Abiy Ahmed. However, the group has remained steadfast and even continued to closely push for the rights of Somali people in Ogaden.

Farmajo's administration which might collapse on Sunday when legislators elect new president has often been linked to extreme abuse of human rights in the country. Most of his critics have been subjected to torture, arbitrary detentions, deaths, and even executions.

For instance, Mukhtar Roble, a former Al-Shabaab deputy leader, who had quit the group and offered to run for the Southwest presidency, was arrested in 2018 and since then, he has remained a guest at government detention centers. To date, he has never been charged.

During his arrest, authorities in Somalia with assistance from Ethiopian National Defense Forces [ENDF], opened fire in Baidoa, killing eleven people. The government of Farmajo, whose tenure ended last year, has never accounted for the deaths.

On Sunday, Farmajo will be trying to defend his seat in a parliament that has seemingly been controlled by the opposition based on the results of the election of House leadership teams. Former Presidents Sharif Sheikh Ahmed and Hassan Sheikh Mohamud are also in the race.