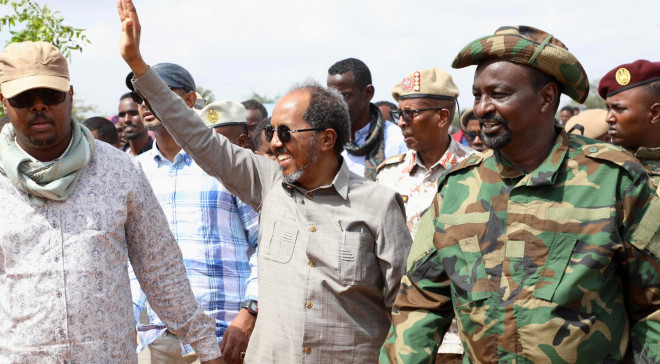 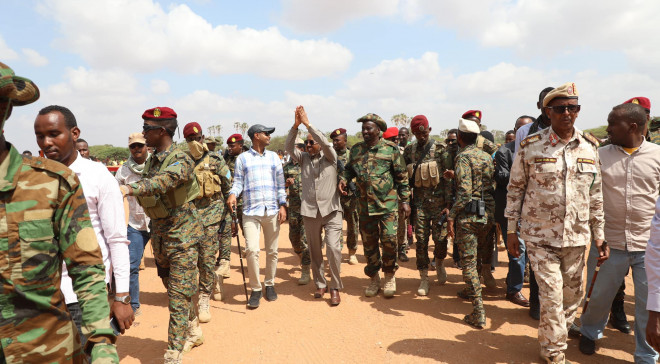 The president's visit has been termed a motivational move after Al-Shabaab began to make a comeback in some areas, including Wabho in the Galgadud region under Galmudug State after the troops withdrew.

The fight against Al-Shabaab has intensified in recent months particularly in Galgadud, Hiiraan and Bay regions, with the soldiers working closely with the US Africa Command, the African Union Transition Mission in Somalia [ATMIS] and local militia, who have been instrumental in the war.

State media reported that the president with his team led by senior commanders is visiting Galmadug and HirShabelle states where he's motivating infantry units who are directly involved in the combat. The President is the Commander-in-Chief of the Armed Forces.

"President Hassan Mohamud, who is also the commander in chief of armed forces is visiting recently liberated areas and frontlines in Galmudug and Hirshabelle States to meet Somali National Army and locals who are battling with terrorists, " state media confirmed.

In his recent addresses, the president insisted that " we have made great progress and we're not about to quit. It is a war we must win". While encouraging locals to join the fight, he added: " Let us fight for our country it belongs to us. We have a duty to protect ourselves and future generations. "

Already, Hassan Sheikh Mohamud has warned business owners against funding Al-Shabaab whether through extortion or willingly, adding that those found culpable will have their trading licences revoked. The country is plotting to block Al-Shabaab revenue sources as a long-term strategy to defeat them.

The United States has also increased the reward schemes for those volunteering information about Al-Shabaab, with informers now being guaranteed $10 million. The Al-Shabaab militants have increased retaliatory attacks, this time targeting innocent civilians across the country.

Al-Shabaab militants have been fighting to topple the fragile UN-backed federal government of Somalia, but the group has substantially lost several strategic towns following the offensive by the Somalia army. Thousands of people have been killed by the militants.