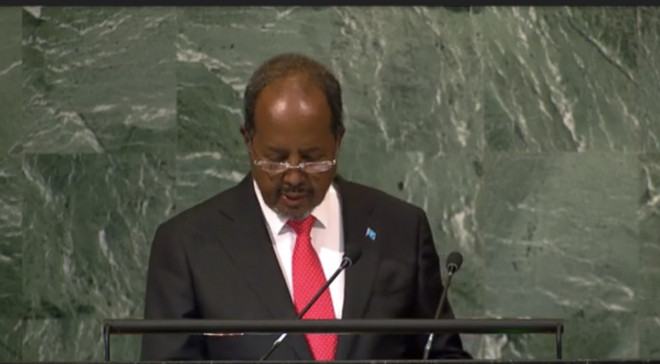 In his address, a determined president whose main focus has been eliminating the militants besides improving the economy of Somalia insisted that Al-Shabaab does not "have a religion or human value." "They are violent criminals who seek to terrorize innocent people simply," he said.

Since taking over in June this year, Hassan Sheikh has been encouraging the military to degrade the militants completely; this informs the latest gains made in Hiiraan, Galgaduud, and Bay regions, where the militants have been dominating for several years.

The president, who has been in America for a couple of, not days, said: "The Somali people now believe Al-Shabaab can and only be defeated, and this is our real new source of energy and inspiration as a government in the fight against international terrorism."

For the past few months, a number of local militia have been fighting alongside the Somali National Army [SNA] and the African Union Transition Mission [ATMIS] troops. They have pitched a tent in different parts of the country, intending to dislodge the militants from strategic towns.

Hassan Sheikh, who made a second return to Villa Somalia, said the war against the militants could not be warned just through the military alone, noting that there is a need to destroy sources of revenue for the group, which has systematically enhanced its activities.

"We need to focus all our joint efforts on our Somali government's new strategy of the military, ideologically, and financially challenging terrorism and terrorists to be sure that they are comprehensively defeated once and for all — and quickly," he said.

Further, he challenged the world to join the country in making the revolution succeed for the sake of future generations. "Somali people organically raised to support their government," added the president, whose speech aroused the audience.

He also took time to explain food insecurity and the current drought affecting Somalia, which has put risk the lives of millions of people. According to the United Nations, at least 7 million Somalis could be battling famine should the world fail to act quickly.

The president also linked drought to global warming, noting that while Somalia may not be a massive contributor to this worldwide phenomenon, it will, however, " put enough mechanisms to ensure proper legislations are in place to protect the environment."

Some regions affected by the ongoing drought have reported deaths, with the United Nations asking the world to chip in and assist the country. Somalia is also fighting to revamp a dwindling economy which has resulted in the unemployment of thousands of youths.