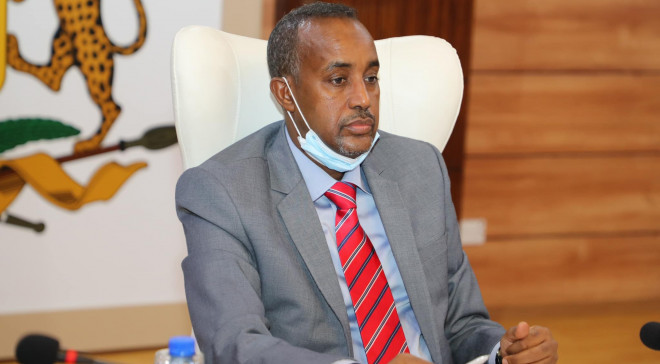 Security forces used live bullets to disperse demonstrators who had gathered in the capital, despite the fact the constitution allows freedom to picket. Thousands of people had gathered to challenge the outgoing government to pave way for elections.

In a tweet Roble, however, wondered why some of the demonstrators were armed, adding that security forces acted for their own safety. The PM asked Somalis to retrain themselves from acts of violence, adding that it might destroy the peace the country has yearned for over several decades.

On elections, he insisted that the country will hold polls in the coming weeks, adding that the exercise should be free and fair. However, he did not reveal the status of the meeting called by outgoing President Mohamed Abdullahi Farmajo.

"I am sorry for what happened last night and this morning in Mogadishu. We tried to avoid it. Peaceful demonstrations are constitutional rights but armed demonstrations are not. Elections are taking place, let's not destroy the peace we've made," he noted.

The Ministry of Foreign Affairs had also condemned the violence which broke out, sensationally claiming that the security team attached to presidential candidates is the one to be blamed for the violence.

"The Federal Government of Somalia condemns the violence against members of the Somali Security Forces carried out by security personnel of the prospective presidential candidates on the night of 19th February 2021," the statement read.

Several international actors have also condemned the violence, with IGAD and the United States of America leading the pack. The team asked politicians to restrain themselves from acts of violence.

"The Inter-Governmental Authority on Development [IGAD] strongly condemns the violence in Mogadishu in the last twenty-four hours. IGAD further condemns the growing hostility and extreme belligerence in political contests in the country," IGAD noted.

"We urge an end to all violence and remind all parties of their commitment to immediately conclude an FGS-FMS agreement on election implementation," the US said in a statement.