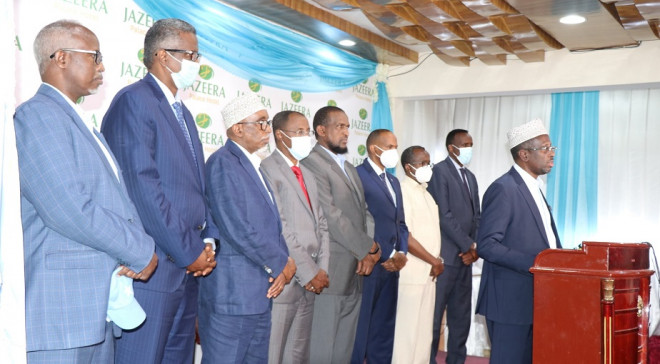 MOGADISHU, Somalia - A group of opposition presidential candidates in Somalia have written to the president of the United Nations Security Council [UNSC] Ms Barbara Woodward, demanding immediate intervention over the current political stalemate in the Horn of Africa nation, which threatens disintegration.

For the past one year, Somalia's stakeholders have failed to reach a compromise for the upcoming elections leading to unprecedented delay, a move which has further escalated to political fist fight between the federal government and a determined opposition.

Already, President Mohamed Abdullahi Farmajo's term has ended so as that of parliament, raising legitimacy questions, which the opposition want answered. Farmajo was set to leave office on February 8 but he has continued to discharge his duties.

In the statement which was also copied to several international actors, the 15 candidates asked the UNSC to intervene and prevail upon Farmajo to handover power, resign or otherwise facilitate smooth transition by handing over to a transitional council.

"It's deeply regrettable that former President Mohamed Abdullahi Farmajo has refused to hand over power and facilitate smooth transition through a fair and credible election in the country," read part of the tough-worded statement.

"We require you to intervene swiftly as political legitimacy of our fragile institutions require Farmajo to make immediate transfer of power, step down or handover to transitional council," it further read, in what could now change the political discourse of the country.

Barbara Woodward, they added, should now ensure open investigations over the alleged assassination attempts targeting them, citing incidents that preceded the February 18 and 19 events. Security forces, they argued, targeted through use of live bullets and even "attacking our hotels".

The letter to the United Nations Security Council is yet to be responded to by the government, which has after all continued with plans to hold elections. On Sunday, Farmajo met a section of electoral dispute team from various states apart from Puntland and Jubaland.

With opposition accusing government of planned assassinations, the government on the other hand accuses them of armed insurrection. Jubaland wants Farmajo out of the election process while Puntland President Said Abdullahi Deni accuses him of plans to cling to power.

Somalia was set to hold elections from December last year but the stakeholders have been accusing each other over failure to implement the agreement that was signed in September. The future of the country is now gloomy as stakeholders rush to avert a possible political fallout.