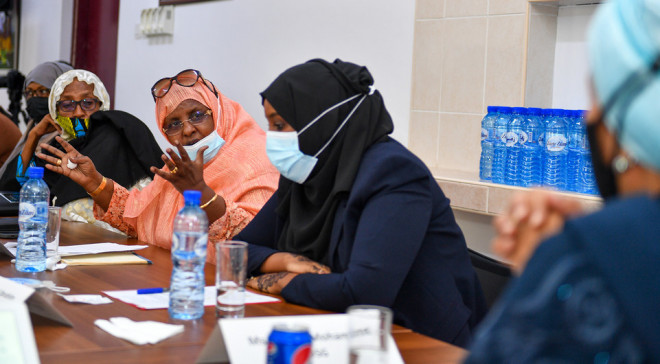 MOGADISHU, Somalia - Women from the federal republic of Somalia have been challenged to join politics, with the United Nations insisting that their presence in the political arena would help them shape the vision and governance in the Horn of Africa nation.

Being a patriarchal society, Somalia has struggled to embrace women's leadership, with a number of them playing peripheral duties in the country. Gender mainstreaming has been a difficult journey in Somalia, given the cultural beliefs.

During her trip to Somalia on Sunday, United Nations Deputy Secretary-General Amina Mohamed said the country should embrace women's leadership, adding that their participation in politics should be highly embraced by the government.

She highlighted Somalia's parliamentary elections as an opportunity to build on the progress made in women’s political participation and emphasized that women’s full inclusion in all sectors of society will contribute to greater resilience, peace, and stability.

“Somalia achieved a milestone at its last elections in 2016/17 with 24 percent of parliamentary seats filled by women, and I am hopeful that the country will build on this by expanding women’s participation even further – ensuring the 30 percent quota is met is an important first step to full representation and inclusive society. The peace dividend will not happen without women,” Ms. Mohammed said.

At Mogadishu, Amina Mohamed met with outgoing President Mohamed Abdullahi Farmaajo before holding a consultative meeting with Prime Minister Mohamed Hussein Roble, who is technically in charge of the ongoing electoral exercise.

“Prime Minister Roble and other members of the NCC have shown great leadership and commitment to advance women’s political participation, including through specific measures such as decreasing fees for women candidates and appointing Goodwill Ambassadors and Champions to advocate for greater inclusion," she said.

"It will also be important to agree on a specific mechanism on how exactly the commitment of a minimum 30 percent quota will be achieved in the upcoming elections,” the Deputy Secretary-General added.

Ms. Mohammed met with Somali elders as well as women leaders and advocates from a range of areas – electoral management bodies, goodwill ambassadors, champions, and civil society leaders – and expressed her solidarity with their efforts to bring about greater involvement of women in the country’s political sphere as well as in economic life.

The Deputy UN Secretary-General noted the concerns voiced on the overall situation of Somali women, including levels of violence and insecurity for women, and how this also impacts participation in political life.

“Women should be able to participate in the elections without fear of violence, intimidation, and discrimination,” Ms. Mohammed said. “But the same also applies in going about daily life, whether in education, commerce or social life.”