Somalia: We have risen against Al-Shabaab, we can't wait for UN condolences 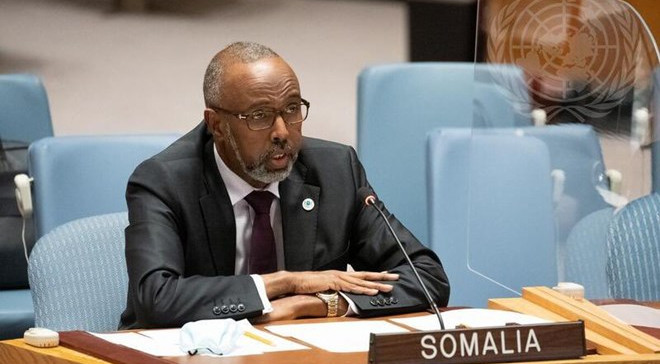 MOGADISHU, Somalia - The government of Somalia has reiterated its commitment to defeating Al-Shabaab militants, noting that the uprising will help completely defeat the group which has been causing havoc and mayhem in the country and across the borders for the last 16 years.

Statistics show that the Somali National Army [SNA] with the help of local militia, the US Africa Command, and the African Union Transition Mission in Somalia [ATMIS] has managed to dislodge the militants from critical and strategic towns in the last couple of weeks following intense mobilization.

The country's ambassador to the United Nations Abukar Osman says that country will no longer wait to hear "messages of condolences" but will instead work hard to ensure all parts of the nation are secure from the Al-Shabaab extortionists, who are gradually losing bases in Somalia.

“Somalis have risen against Al-Shabab and will not await the UN security council’s condolences for another terrorist attack. Somalis will continue to resist with arms and with their bare hands against Al-Shabaab until a decisive victory is achieved," said the envoy.

Almost on a weekly basis, the country suffers attacks from the Al-Shabaab mostly through Improvised Explosive Devices [IEDs] and at times truck bombs, which usually target the security forces, government officials, and in most cases, innocent civilians, who have borne the brunt of the attacks.

A report by the United Nations recently indicated that close to 613 people have been killed in Somalia this year alone, with slightly over 900 injured, the highest figure since 2017. The most recent attack targeted the Ministry of Education where 123 people were killed and over 350 injured.

The Somalia envoy to U.N. Abukar Osman said victims of Al Shabab are asking why lifting the arms embargo is a threat to international peace and security while other countries are being armed to defend their territory and people. He insisted that the time has come for civilians to take arms against the government.

On Sunday Somalia’s president Hassan Sheikh Mohamud on Sunday visited Lamagalay base, the site of deadly twin car bombings in Beledweyne last month. The president said attacks on government buildings will only stop “when Al-Shabaab disappears.”

Clan militia has been instrumental in the fight against Al-Shabaab, with the group's giving the drained SNA soldiers much-needed reinforcement on the battlefield.

So far, over 500 Al-Shabaab militants have been killed in the ongoing crackdown, with the government insisting that the offensive will not stop any soon.