Suicide blast kills at least four in Somalia ahead of elections 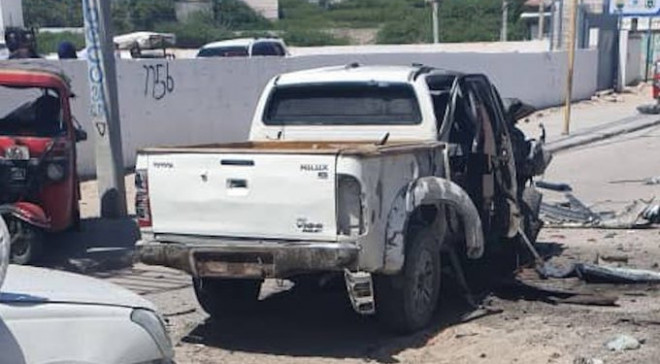 MOGADISHU, Somalia - With just a few days to the presidential elections in Somalia, a suicide bomber targeted KM-4 junction which is located near the Aden Adde International Airport and the National Intelligence Security Agency [NISA] headquarters.

Police said four people died, including the bomber on the spot and several others were wounded after the suicide bomber targeted a car assigned to a top official whose name is yet to be revealed. The explosion just comes a few days before the country holds a presidential election.

The vehicle which was targeted was among those crossing towards the busy Aden Adde International Airport, which is frequented by high-profile politicians and visitors. It was just three weeks ago the Al-Shabaab militants also targeted the airport.

On Sunday, Somalia will be holding a presidential election that has attracted over 30 candidates, with outgoing President Mohamed Abdullahi Farmajo declaring interest in the seat. He will be facing among others, former Presidents Sharif Sheikh Ahmed and Hassan Sheikh Mohamud.

Security concerns have been raised and despite the fact that security responsibilities were handed to African Union Transition Mission [ATMIS] in the country, the attacks are persistently targeting areas located near Afisiyoni tent where elections will be held.

There is no group that has taken responsibility for the attack but the Al-Qaida associate, the Al-Shabaab is known for such attacks. The group has heightened attacks within the capital Mogadishu in recent months as the country struggles to conclude elections.

Elsewhere, the Al-Shabaab friendly media outlets reported that a suicide bomber driving one of its truck bombs that exploded at a military base controlled by Burundian forces was a Kenyan national, who has been working with the group for a couple of years.

The bomber was identified as Jamaal Diba Diida alias Zubeyr Al-Muhaajir. The May 3 attack killed at least 30 Burundian soldiers and was the first major attack targeting ATMIS Forward Operating Base since the new transition mission took over from AMISOM in March.

Al-Shabaab militants control large swathes of rural central and southern Somalia but their influence has been degraded by concerted military operations within the region. There have been also efforts by regional players to help the country stabilize.