Tahlil's father: I won't accept money at the expense of my daughter 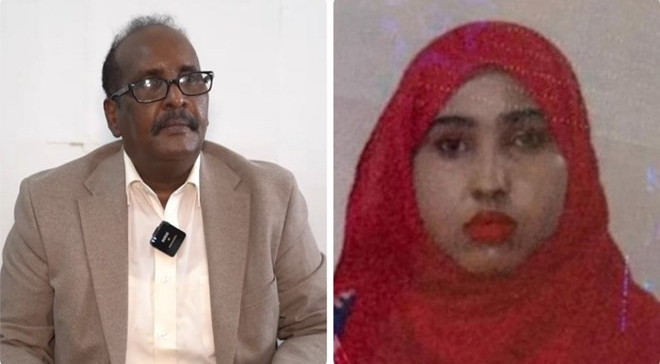 MOGADISHU, Somalia - The father to slain National Intelligence Security Agency [NISA] agent Ikran Tahlil has spoken for the first time about his daughter, days after the agency announced the demise, about two months after her mysterious disappearance.

Ikran Tahlil went missing on June 26 this year, with the family searching for her desperately without the intervention of the state. The government failed to give timely information about her whereabouts despite the family's persistence.

And for the first time, her father, Tahlil Farah, has spoken about the gruesome murder. Tahlil states that Fahad Yasin, then NISA Director, failed to produce any results thus attempted to ignore his knowledge on the whereabouts of Ikram.

Tahlil also states that "the family won't accept any blood money even if it's more than billions". Tahlil asks the military tribunal court to "bring the perpetrators to justice". PM Mohamed Hussein Roble has recently instigated the investigation of Ikram's missing case.

So divisive has been the death to an extent of causing cracks within the executive. Roble fired NISA Director Fahad Yasin, replacing him with Lieutenant General Bashir Mohamed Jamah alias Goobe.

However, President Mohamed Abdullahi Farmaajo denounced the move, before elevating Fahad Yasin to be his National Security Advisor. At the same time, he appointed Yasin Abdullahi as the new director, overruling the appointment made by the PM.

On Saturday, the PM and Farmaajo met at Villa Somalia over the controversial death but sources indicate they did not reach an agreement over the investigations. While Roble is backing the military courts to investigate the matter, Farmaajo has expressed reservations.

It's not clear how the matter will go, but already, various groups have supported PM Roble, who is now battling for survival following the onslaught from Villa Somalia. Roble has also accused Farmaajo of politicizing the death of Ikran Tahlil.