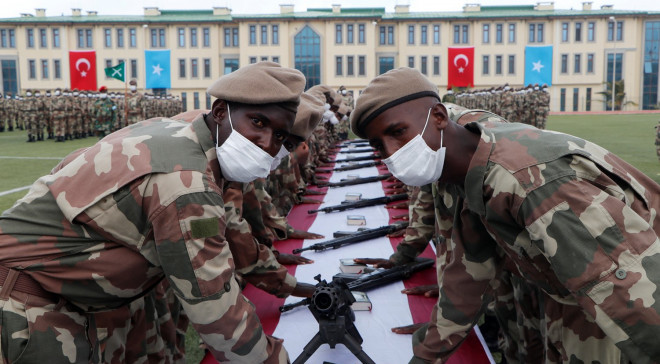 MOGADISHU, Somalia - Somalia welcomed another contingent of Gorgor troops on Sunday following the successful completion of their training in the Turkish-run military school in Somalia, as the country reinforces its troops in the fight against Al-Shabaab militants.

Turkey is one of Somalia's security partners and has been working hard to ensure more troops are trained in the country, which is trying to stabilize the military after decades of backsliding, following the ouster of Siad Barre, the former military leader.

Chief of Defense Forces General Odowaa Yusuf Rageh commissioned sections of 9th Battalion troops to the Somali National Army in a ceremony that was held at the Turkish-run military school in Somalia on Sunday.

In his address, Odowaa, who has been leading operations against the Al-Shabaab militants, asked the soldiers to serve the country with "loyalty and patriotism" adding that "our main role is to protect the country from aggression.

The troops will now be domiciled in several areas in Lower Shabelle and Middle Shabelle where the military has been pursuing the Al-Shabaab militants. Turkey is responsible for training both Gorgor troops and the Haramcad police officers.

The two groups of security forces have often been dragged to the country's tough internal politics with the opposition accusing outgoing President Mohamed Abdullahi Farmajo of often using them to settle political scores with his fierce opponents.

Early this year, they were accused of unleashing violence against peaceful protestors who demanded the exit of Farmajo after his term extension attempts. The government has often defended the troops from such accusations.

Besides the Gorgor troops, the country also benefits from special training of soldiers from the United States which trains the Danab Special Forces. The troops on Sunday killed at least 15 Al-Shabaab militants in Lower Juba, the SNA force said.