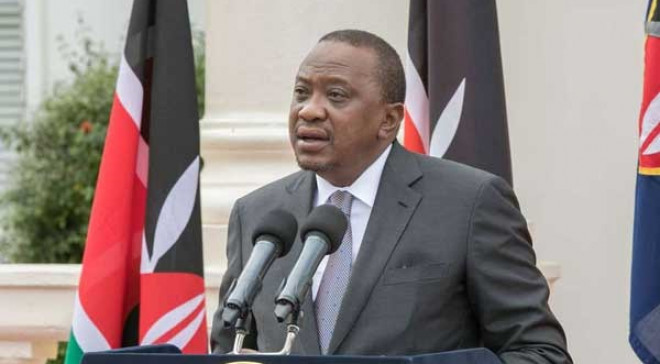 NAIROBI, Kenya - Kenya will not respect the ruling by the International Court of Justice [ICJ] on the maritime border dispute with Somalia, President Uhuru Kenyatta said, in what could further trigger animosity between the two neighboring countries.

In a lengthy judgment on Tuesday, the ICJ seemed to back Somalia's claims on the maritime dispute, following the decision to rubbish Kenya's argument that the border should extend from the land straight to the sea.

But in a statement, Uhuru, who is currently in the United States, rejected the court's ruling, adding that Nairobi will not respect the outcome due to biases exhibited throughout the case which started a couple of years ago.

“At the outset, Kenya wishes to indicate that it rejects in totality and does not recognize the findings in the decision. The decision embodies a perpetuation of the ICJ’s jurisdictional overreach and raises a fundamental question on the respect of the sovereignty and consent of States to international judicial processes,” said Kenyatta.

“International tribunals have jurisdiction only to the extent of consent by a State.”

Uhuru, who is set to meet US President Joe Biden on Wednesday, added that the decision by the World Court will strain relations between Kenya and Somalia.

“This decision is, in the circumstances, a zero-sum game, which will strain the relations between the two countries. It will also reverse the social, political, and economic gains; and potentially aggravate the peace and security situation in the fragile Horn of Africa Region,” the statement further reads.

But his Somali counterpart Mohamed Abdullahi Farmaajo asked Kenya to respect the outcome of the court and focus on building mutual relationships and trust for the sake of future engagements.

In a televised speech following the ruling, Somalia's Mohamed Abdullahi Mohamed said Nairobi should "see the decision of the court as an opportunity to strengthen the relationship of the two countries".

Somalia had dragged Kenya to the court in 2014 after years of efforts to resolve a dispute over the 100,000 square-kilometer tracts that failed.

"Since the day I was elected, we have faced political, diplomatic, security, and economic pressure by the Kenyan leadership," Farmajo said.

"The verdict was a fair indication of the transparency of the International Court of Justice."

Judges unanimously ruled there was "no agreed maritime boundary" in force and drew a new border close to the one claimed by Somalia. The ICJ's judgment is final and cannot be appealed, but the court, set up after World War II to rule in disputes between UN states, has no means of enforcing its rulings.

States can however go to the UN Security Council if another country fails to obey a ruling. Nairobi says it has exercised sovereignty over the area since 1979.

The contested area is believed to contain rich gas and oil deposits, and also has important fishing rights. Nairobi has already granted exploration permits to Italian energy giant ENI but Somalia is contesting the move.

Currently, Kenya has close to 3,500 troops in Somalia serving under AMISOM and it's not clear how Tuesday's decision will affect the arrangement. Nairobi has been a key security partner of Somalia, but the relationship has significantly dwindled under Farmaajo's reign.