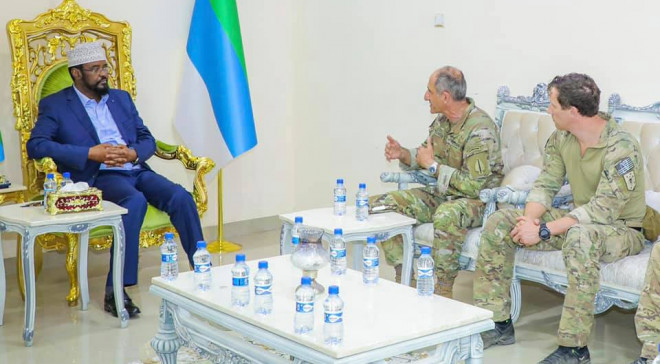 MOGADISHU, Somalia - The United States will resume the Al-Shabaab war in Somalia after months of absence, in what could increase the odds of the Horn of Africa nation, which has struggled to contain the militants in as many years.

Al-Shabaab militants control huge sections of rural central and southern Somalia and have been fighting to topple the fragile UN-backed Somalia administration. The militants have managed to extort taxes from locals in the country.

Last week, Jubaland President Ahmed Madobe hosted a delegation from the US Africa Command, which has been instrumental in the fight against Al-Shabaab. The US Africa Command had close to 700 soldiers in Somalia before withdrawal in January 2020.

Madobe and the US military officials discussed the “importance of cooperation in the fight against terrorism.” US commander in charge of special operations in Somalia Colonel Thomas Sarrouf was among officers.

"The President of Somalia’s Jubbaland State, Ahmed Madobe has today received at the region’s State House in Kismayo US military officers in Somalia led by Col. Thomas Sarrouf and discussed strengthening security cooperation and the fight against terrorism, " state media reported.

Former President Donald Trump withdrew the troops in January arguing that the move will help in " cost-cutting". The soldiers were, however, repositioned elsewhere within Kenya and Djibouti, where they are helping in the fight against Al-Shabaab.

Before the withdrawal, Somalia politicians both in government and opposition challenged the move, arguing that it could erode gains made in the Al-Shabaab war. The military was responsible for coordinating air strikes again Al-Shabaab, significantly helping ground troops.

Further, the troops have been training Somalia's Special Forces commonly known as Danab. The Danab forces help in sophisticated operations within Somalia and have previously managed to liberate several towns that were under the militants.

In 2020 alone, the US Africa Command managed to conduct close to 48 airstrikes in Somalia which left over 300 militants dead and others severely injured. The visit by top generals indicates the US is about to resume military operations in Somalia.

The New York Times recently reported that President Joe Biden was mulling a possible deployment of the military to Somalia. But already, the US army has been positioned in Wajir, Kenya where they are assisting Kenya Defense Forces [KDF] in the Al-Shabaab war.