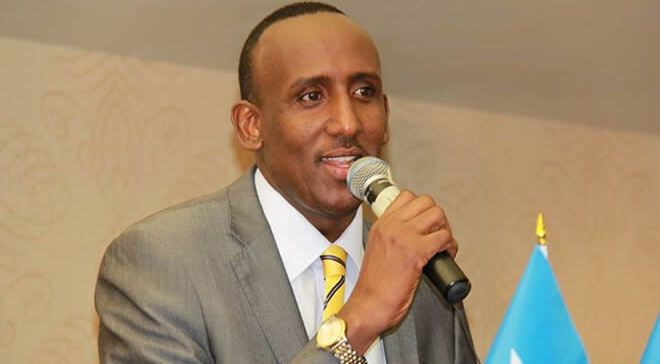 HARGEISA, Somalia - A presidential candidate in Somalia's much-anticipated polls was arrested in Hargeisa, the capital of secessionist Somaliland on Sunday, in a move that showcases the strained relationship between FGS and Muse Bihi's administration.

Mustaf Dhuhulow, who also serves as a Member of Parliament, was arrested by authorities in Somaliland at Igal International Airport in Hargeisa, on his way to an undisclosed e=destination from Mogadishu where political activities have been increasing for the last couple of weeks.

For almost five days, Dhuhulow was among 14 presidential candidates who had held a conference in Mogadishu where they called for credible elections. The team had asked the international community to chip in and help persuade the Federal Government to disband the electoral committee on grounds that it was compromised.

He is held at the airport custody and expected to be sent back to Mogadishu on Monday according to impeccable sources. Somaliland is yet to issue a statement with regard to arrests but the region has imposed sanctions on politicians relating to Mogadishu.

Since 1991, Somaliland has been running a parallel government after claiming to secede from Somalia. But the breakaway region has not yet gained any recognization as a sovereign state.

The region has refused to rejoin Somalia despite constant pressure from negotiators and in recent months, it intensified calls for international recognition. Early this year, President Mohamed Abdullahi Farmajo apologized to the northern people over atrocities committed by his predecessors.

Puntland was among the states that signed a pre-election deal in September which seems to have been reneged on by Jubaland. Deni, a close ally of Jubaland President Ahmed Islam Mohamed Madobe, said the country should embrace dialogue for credible elections.

Somaliland declared self-independence in 1991 following years of repression under the military...