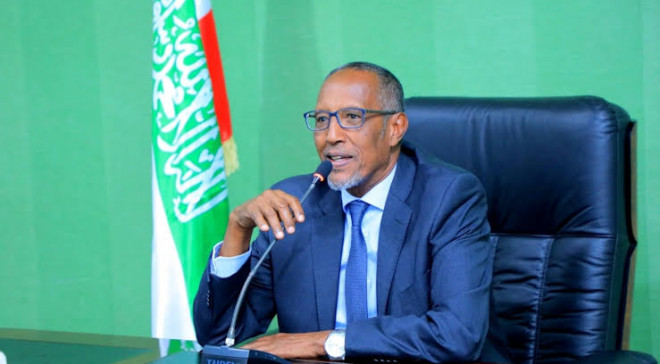 HARGEISA, Somalia - Somaliland leader Muse Bihi Abdi has yet again slammed Somalia's outgoing President Mohamed Abdullahi Farmajo for the current standoff in Mogadishu, just a few days after deadly skirmishes in the Horn of Africa nation, which is yet to have a stable government in as many months.

For the better part of the weekend, chaos erupted in Mogadishu, the Somali capital, leading to the displacement of thousands of people besides leaving at least four people dead. The chaos involved forces loyal to Farmajo and those supporting the opposition.

The opposition troops, who had left various Forward Operating Bases in Middle Shabelle, accused Farmajo of endorsing illegal term extension, adding that the president had no mandate to continue staying in power as the head of state.

And at Berbera, Muse Bihi Abdi, the fifth president of Somaliland, laid blame on Farmajo, who he accused of "promoting" hostilities in the "neighboring" Somalia, adding that there is a need for the government to listen to the people.

"Today we were very concerned and shocked when we saw the resumption of hostilities in Mogadishu, and the blame lies with the government, which at the end of its term refused to listen to the people," said President Muse Bihi.

Somaliland declared self-independence in 1991 following the break out of the civil war in Somalia. The region, which is yet to be recognized internationally, was a British protectorate while Somalia was under the Italians before the two formed a union, the Republic of Somalia.

Somaliland runs a separate government with its own currency, executive and Judiciary, and has been pushing for international recognition for many years now. However, it didn't achieve any recognization for 30 years.

Early this week, Farmajo hinted at the possibility of rescinding the two-year term extension during his much-anticipated address in the Lower House on Saturday. However, he blames international "actors" for meddling in the country's internal politics.

The US, European Union, and the United Nations are among key stakeholders who had warned against term extension. The opposition welcomed the move for FGS to go back to the negotiation table for the sake of stability and development in Somalia.

At Berbera, Muse Bihi Abdi was inspecting the Port which is being done by the DP World, a firm controlled by the government of Dubai. Once completed, Somaliland envoy to Kenya Bashe Omar notes, the Port of Berbera will be one of the best investments in the Horn of Africa.

"Once fully operational the port will transform each and every sphere of life in Somaliland and the Horn of Africa," noted the former Somaliland envoy to the United Arab Emirates, a major investor in the secessionist state.

Somalia usually accuses the UAE of working closely with the opposition which is keen to kick out President Mohamed Abdullahi Farmajo.