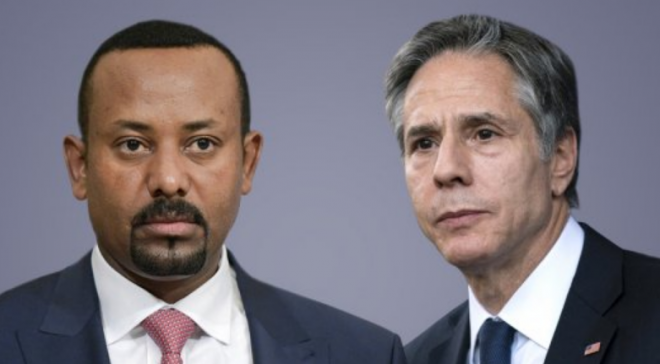 ADDIS ABABA - The United States wants Ethiopia to fully implement the peace deal which was recently signed in Nairobi and Pretoria, noting that there is a need for both parties to embrace a ceasefire and allow uninterrupted humanitarian access to the northern state.

Antony Blinken, the US Secretary of State, on Wednesday reached out to Prime Minister Abiy Ahmed, whom he asked to ensure basic services such as banking and telecommunication infrastructure are restored in Tigray, over two years following massive destruction caused by both parties.

The Secretary of State noted that the same gesture should be extended to Afar and Amhara regions which have also been severely affected by the Ethiopian war, which has lasted for two years. The Ethiopian National Defense Forces [ENDF] have been at war with the Tigray People's Liberation Front [TPLF].

"Secretary of State Antony J. Blinken spoke today with Ethiopian Prime Minister Abiy Ahmed about efforts to bring lasting peace to northern Ethiopia," read the statement. "Secretary Blinken recognized ongoing efforts by the Ethiopian government to work towards unhindered humanitarian assistance and restoration of basic services in the Tigray Region as well as in the neighboring Afar and Amhara Regions."

For peace to be restored in Tigray, he noted, the country must push for immediate withdrawal and disengagement of Eritrean troops in Tigray, with the disarmament of TPLF also getting implemented concurrently. This, he recognized, will help the parties respect the peace deal without controversies.

"The Secretary underscored the importance of immediately implementing the cessation of hostilities agreement, including withdrawal of all foreign forces and concurrent disarmament of the Tigrayan forces," added the statement. "He noted that the United States remains committed to supporting the African Union-led process, including the AU monitoring and verification mechanism."

The TPLF team warned recently that it will not respect the peace deal should the country fail to push for the withdrawal of Eritrean troops from parts of Tigray. Thousands of people have died since the conflict started with millions getting displaced in the process according to the United Nations.