Duale: Kenya's troops will not leave Somalia any soon 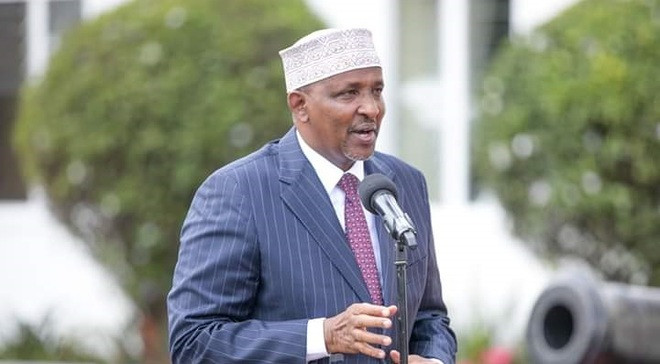 NAIROBI, Kenya - The Kenya Defense Forces [KDF] will only leave Somalia once stability is achieved, new Defense Minister Aden Duale has insisted, noting that Kenya will work closely with the African Union Transition Mission in Somalia [ATMIS] to ensure that the goals are achieved.

Duale, an enthusiast of Somalia nationalism, said the Kenyan troops have played an integral role in instilling professionalism in the Somali National Army [SNA] which is supposed to take over from ATMIS matters security once Al-Shabaab militants are completely neutralized.

There are close to 3,500 KDF troops serving in ATMIS and the participants work on a rotational basis for one year according to KDF peacekeeping mission doctrines. For instance, the contingent that will serve in 2023 has already been trained for dispatch which is taking place early next year.

“We will be in that country to restore peace and once that is done, we will move out of Mogadishu. However, there is already a drawdown to the exit plan, starting with the TCC which has more troops than Uganda. But since the KDF’s entry into Somalia, the al-Shabaab militia has yet to be suppressed,” Duale said in a recent interview. “Our engagement is based on national security, and we believe that we have registered some achievements as the number of attacks has come down.”

Duale, a close ally of former Somalia President Mohamed Abdullahi Farmajo, expressed Kenya's readiness to work with Somalia, saying “they have shown us the goodwill of working with the government of President William Ruto and we have embraced them accordingly. As a government.”

“While it is true that on a personal level Farmajo is a friend, I do not support individual leaders, rather I always work with the current government. I also know President Hassan. We do not interfere in the internal affairs of other countries. We deal with them only on the basis of mutual interest and good neighbourliness,” he said.

His commitment came hours before s lone Al-Shabaab gunman stormed a KDF Forward Operating Base on Monday killing at least three soldiers and injuring five others. While the numbers of the Kenyan soldiers who have died in the war are scanty, it is believed over 400 have already died with El-Adde and Kulbiyow attacks being the worst.

But in return, the KDF troops have significantly changed the fortunes of the country by helping to liberate strategic Kismayo town, the regional administrative capital of Jubaland which once harbored the militants besides being their main tax collection center according to the US.