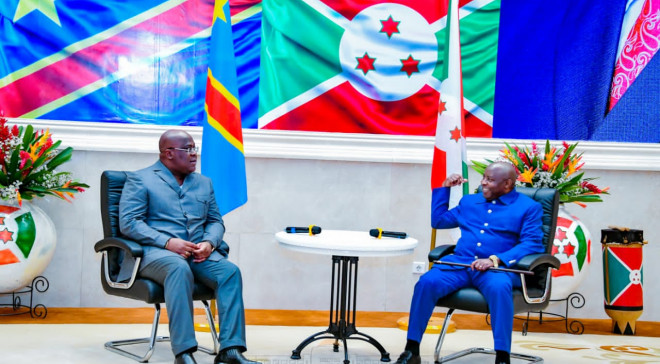 NAIROBI, Kenya - The East African Community bloc’s chairperson and the current Burundian President Évariste Ndayishimiye has revealed that he is yet to confirm whether the Rwandan government was backing the M23 rebel group as alleged by the Democratic Republic of Congo.

President Évariste said that he is optimistic about a breakthrough in finding a lasting solution to the crisis facing the two nations.

The M23 rebel group in May this year launched renewed attacks on Felix Tshisekedi’s government forces and has captured key towns.
Tshisekedi’s administration has been accusing Paul Kagame’s government of supporting the M23 rebels and recently, it consequently expelled Rwanda’s Ambassador.

Burundian President Évariste in a recent interview on France 24 and RFI, revealed that there is progress in dialogues on the situation in DRC and he has not yet decided on accusations against Rwanda.

“I can’t say that we are lagging behind. We are in advance. Regarding dialogues and reconciliation between the two states, the rapprochement is a good step, accepting to sit together is progress. I consider it significant progress because there are meetings and I have seen that the international community such as the United Nations, European Union, and President Macron who is president of the EU are aware of the process to seek a solution and restore peace in that region,” he said.

Évariste further said that he has not established whether Rwanda is behind M23 rebels in DRC adding a consultative meeting will soon analyze the situation.

“Until now, at the level of the region, we, including myself, have not yet decided on the Congolese accusations about Rwanda. We are planning a consultative meeting with the Angola president as the facilitator. We will have the opportunity to analyze and see the reality about the issues,” he said.

Burundi is sending two battalions to the South Kivu region, in DRC, as part of the joint regional force of the East African community.
“There are no tensions between Burundi and DR Congo. We Are hopeful that armed forces will accept laying down arms,” he concluded.

Évariste also hinted that relations between his country and Rwanda are improving.