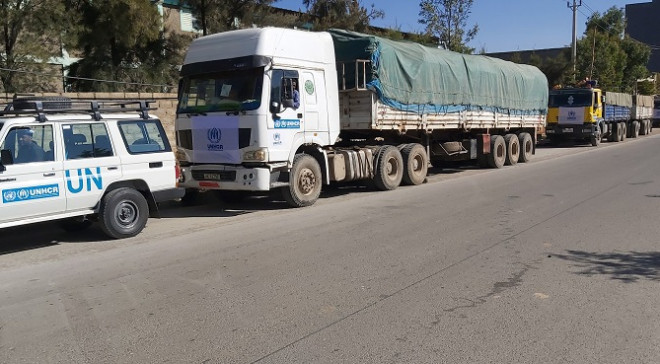 "More is on the way as UNHCR scales up delivery of protection and solutions in Northern Ethiopia," the UNHCR said in a statement via social media.

The arrival of the aid in Tigray came after senior commanders of the Ethiopian government and the rebel Tigray People's Liberation Front (TPLF), de facto ruler of the Tigray region, agreed to facilitate humanitarian access in conflict-hit parts of northern Ethiopia in an agreement facilitated by the African Union (AU).

The parties to the conflict have agreed to promote unhindered humanitarian access for all in need in Tigray and neighboring regions and facilitate the movement of humanitarian aid workers.

They have also agreed to provide security guarantees for aid workers and humanitarian organizations as well as protection for civilians in accordance with the provisions of the "permanent cessation of hostilities" agreement signed by the two sides on Nov. 2.

Speaking highly of these confidence-building measures, the AU encouraged the two sides to stride toward the full implementation of the cessation of hostilities agreement, as part of overall efforts to end the conflict and restore peace, security and stability in Ethiopia.

The second most populous nation in Africa has seen a devastating conflict between government-allied troops and forces loyal to the TPLF since November 2020, which has left millions in urgent need of humanitarian assistance.