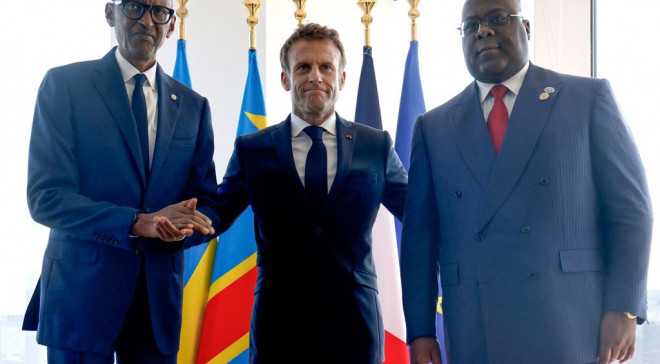 Rwandan President Paul Kagame, French President Emmanuel Macron and Democratic Republic of Congo President Felix Tshisekedi meet at the permanent mission of France at the United Nations on the sidelines of the 77th session of the UN General Assembly on September 21, 2022 in New York. PHOTO / AFP

NAIROBI, Kenya - Emmanuel Macron, the French President agreed to intervene in the brewing diplomatic war between the Democratic Republic of Congo and Rwanda.

This comes just a day after DRC President while addressing the UN General Assembly, President Felix Tshisekedi claimed his efforts to reunite the country and pursue peaceful settlements have been dragged by continual external interference, accusing Rwanda, in particular, of fomenting the M23 rebel movements.

“My goodwill for the search of peace and unity for my country has failed because some neighbors have found no better way to thank us than to aggress and support armed groups that are ravaging Eastern Congo. In defiance of international law, has once again not only interfered in the DRC since MARCH by direct incursions of its armed forces (Rwanda Defence Force RDF) but also occupies localities in North Kivu province (Eastern DRC) by an armed terrorist group, the M23, to which it provides massive support in terms of equipment and troops.”

Macron while speaking to AFP on the sideline of the United Nations General Assembly, French president on Wednesday had invited Rwandan President Paul Kagame to lunch with his DR Congo counterpart Felix Tshisekedi.

Both Macron, Kagame, and Tshisekedi agreed on the need for the pullout of M23 rebels from the strategic town of Bunagana on the Ugandan border.
“The three leaders want to "intensify lasting cooperation to fight impunity and put an end to activities of armed groups in the Great Lakes region," including the Democratic Forces for the Liberation of Rwanda, or FDLR.” Macron told AFP.The

Rwandan government has demanded a crackdown on the FDLR, a Rwandan Hutu group that Kigali views as a threat due to links to the 1994 genocide. But the M23, a separate, mostly Tutsi group in the violence-wracked East of DR Congo, has been the focus of recent tensions.

In his address to the General Assembly on Tuesday, Tshisekedi alleged that Rwanda has provided "massive support" to M23, which he blamed for the shooting down of a UN peacekeeping helicopter in March, in which eight people died.

Kagame while addressing the UN assembly called for calm in his own address on Wednesday. "There is an urgent need to find a political need to find and address the root cause of instability in eastern DRC. The blame game does not solve the problems. These challenges are not insurmountable and solutions can be found. This would ultimately be much less costly in terms of both money and human lives."

US Secretary of State Antony Blinken while on a Visit to DRC in August said there were credible reports of Rwandan support. Of the rebel group, a thing that Kagame's government has long rejected allegations of backing the M23.

It notes only half of an appeal issued in June for $11.1 million has been met, adding that there is an urgent need for long-term solutions.

DR Congo Conflict: We are ready to withdraw but a dialogue with regional forces is a must, says M23

Both Kenya, Uganda, Burundi, and South Sudan contributed troops to the region for peacekeeping missions.