High debt and Climate Change is choking Africa and must be addressed: Ruto tells UN Assembly 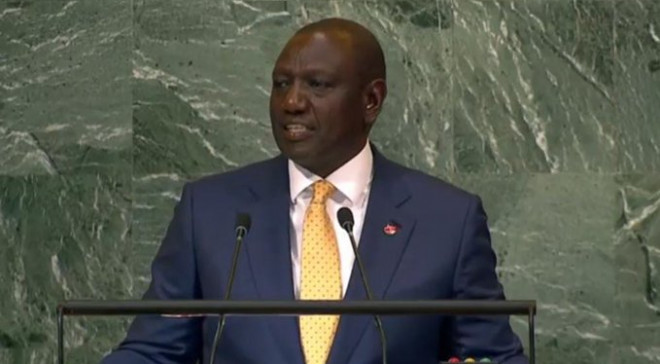 Just like other African heads of state, the president called on the U.N. Security Council to expand representation from the continent.

“I join other leaders in calling upon the World Bank, the International Monetary Fund, and other multilateral lenders to extend pandemic-related debt relief to the worst hit countries, especially those affected by the devastating combination of conflict, climate change, and covid-19,” Ruto told the Assembly.

In his address to the world leaders on Wednesday night, President Ruto urged 20 of the world’s richest nations to either suspend or reschedule debt repayments for third-world countries.

The president further urged the G20 nations to expand the scope of the 11 common frameworks to suspend or reschedule debt repayments by middle-income countries during the pandemic recovery period.

Dr Ruto pleaded with global financial institutions to introduce favourable financial conditions to developing countries, terming the move a booster for development in the African continent.

Due to the COVID-19 pandemic, most African countries were to introduce interventions in an effort of cushioning their citizens from the effects of the pandemic.

President “Most of us have done the best of everything we could in the circumstances. Nevertheless, it is not enough but I believe that by forging international partnership and cooperation between developed and developing countries to avert an economic crisis.”

The head of state also took the opportunity to drum up support for his bottom-up economic model agenda, telling world leaders that his government seeks to include the marginalized working majority in Kenya’s economic mainstream.

“Building back better from the bottom upwards is, essentially, about including the marginalized working majority in the economic mainstream,” he said.

The Kenyan leader had earlier held talks with the United Nations Secretary-General Antonio Guterres in a meeting focused on peace and security, Kenya’s membership of the UN Security Council, climate change, and the humanitarian crisis in the region.

Dr. Ruto’s team said Kenya vowed to continue playing its role to enhance peace, security, and stability in the region.

The Head of State also assured Mr. Guterres that Kenya will continue working with the UN and other international partners to solve long-standing conflicts, poverty, and vulnerability to climate change in the region.

On Tuesday, the president met with American business leaders to encourage investment in Kenya, and he participated in a U.N. forum that discussed “moving Africa from aid to investment,” the Kenyan Foreign Ministry said in a tweet.

Climate change and the devastating drought that is sweeping across the Horn of Africa, endangering 20 million lives, were other themes of Mr. Ruto’s address.

Reservoirs and other water sources were drying up from historic droughts, he said, affecting not just water supplies but agriculture — and, in turn, raising food prices.

Dr Ruto “We cannot afford to waste another moment debating the merits of doing something vis a vis doing nothing. It will soon be too late to reverse the course of events.”

Although Africa, which has a small industrial base, has contributed little to climate change, the continent has already endured some of its worst effects, as extreme weather events take a devastating toll on impoverished countries.

Dr Ruto’s address was a sudden induction into the top flight of foreign affairs for a leader who has spent much of recent years confined to Kenya, where a political feud with his former boss, President Uhuru Kenyatta, had limited his travel abroad.

All that changed with the hard-fought August election that Mr. Ruto, a former deputy president, won by a narrow margin over his main rival, Raila Odinga.