Social media blackout in Uganda ahead of presidential polls 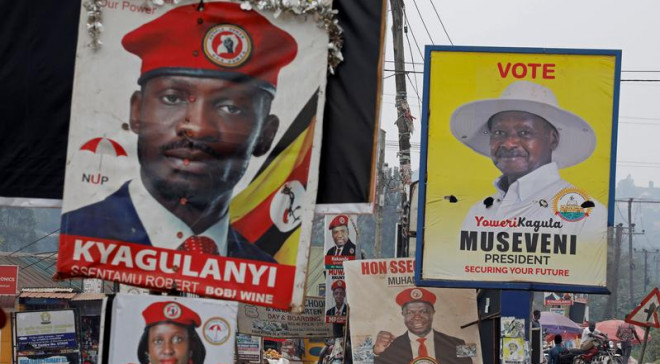 KAMPALA, Uganda - Ugandans will have to bear the brunt of a dictatorship following the decision by the government to ban social media sites, a move which is geared towards managing informing flow ahead of the presidential polls which are scheduled for Thursday.

Museveni's traditional challenger Dr. Kizza Besigye, who at one point served as his personal physician, did not show interest in this year's race. However, the veteran politician is supporting Bobi Wine, in a race that saw the opposition team being blocked from campaigning in the country.

In a television address on Tuesday evening, the 76-year-old leader who took power in 1986, said he had met with the security forces and they were ready to defend any Ugandans worried about coming out to vote because of intimidation by the opposition.

“There is no threat we cannot defeat,” said Museveni, wearing a military camouflage jacket. “We have got all sorts of means, simple and complex.”

Also, the European Union said on Tuesday it expected Uganda to provide a level-playing field for all voters to exercise their democratic rights without fear of intimidation or violence.

“The excessive use of force by law enforcement and security agencies has seriously tarnished this electoral process,” said Josep Borrell, the EU’s top diplomat. He said the bloc’s offer to deploy a small team of electoral experts was not taken up.

In a letter seen by Reuters to internet service providers dated Jan. 12, Uganda’s communications regulator ordered them to block all social media platforms and messaging apps until further notice.

NetBlocks, which is an internet monitor, said its data showed that Facebook, Twitter, WhatsApp, Instagram, Skype, Snapchat, Viber, and Google Play Store were among a lengthy list of sites unavailable via Uganda’s main cell network operators.

On Monday, Facebook said it had taken down a network linked to Uganda’s ministry of information for using fake and duplicate accounts to post ahead of this week’s election.

“Any efforts to block online access to journalists or members of the public are unacceptable breaches of the right to information,” it said in a statement.

South African telecom company MTN Group, the leading mobile operator in Uganda with 60% of the market, said it had complied with the blocking order and was working with the authorities to limit the scope and duration of the disruption.

Wine has been using Facebook to relay live coverage of his campaigns and news conferences after he said many media outlets had declined to host him. Most radio and TV stations are owned by government allies and Uganda’s leading daily is state-run.

Museveni has won every election since the first under his presidency in 1996, though they have been tarnished by intimidation of the opposition and accusations of vote-rigging.

Uganda is a Western ally, a prospective oil producer, and is considered a stabilizing force in a region where war has plagued some neighbours. It also contributes to the biggest contingent of an African Union force fighting Islamist insurgents in Somalia.

When he ascended to power in 1986, Museveni was quoted saying: "The problem of Africa in general and Uganda, in particular, is not the people but leaders who want to overstay in power." Now, 35 years later, the president’s words are returning to haunt him, runs for a sixth term.