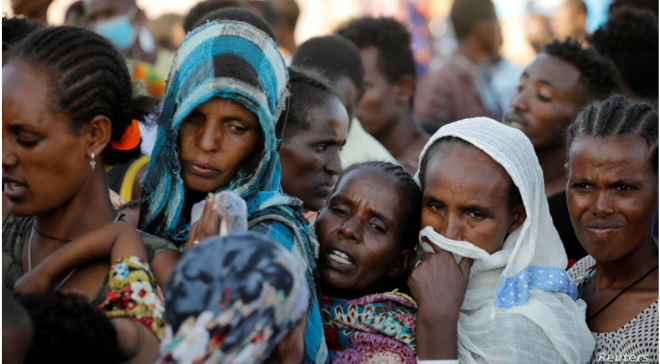 FILE - Ethiopian refugees line up for supplies at the Um Rakouba refugee camp, which houses refugees fleeing the fighting in the Tigray region, on the Sudan-Ethiopia border in Sudan, Nov. 29, 2020.

NAIROBI, Kenya - A leaked phone call has exposed some of the most shocking revelations about the Tigray conflict, with the United Nations officials on the ground now being blamed for downplaying sexual violence claims, despite concerns from top officials.

While those in UN headquarters insisted on sexual violence, United Nations’ team on the ground minimized such accounts during a call in March, contending they lacked sufficient evidence to support all claims and suggesting any U.N. report into sexual violence in the conflict would have to be approved and cleared by the Ethiopian government.

During an internal call among United Nations representatives in Ethiopia in March, several U.N. officials downplayed some instances of reports of rape as sensationalized “media hype” during discussions on how to reduce the risk of sexual violence for women and girls in Tigray.

A recording and transcript of the call were first released by Omna Tigray, a website focused on the Tigray conflict, earlier this month. Foreign Policy independently confirmed the authenticity of the transcript with four people familiar with the matter.

“The supposed escalating cases of sexual violence and rape being perpetrated against women and girls and, in some instances, also media hype—I would call it—around rape being used as a weapon of war, which we know sometimes is true, sometimes it’s not true,” said one voice identified as Letty Chiwara, the U.N. Women representative to Ethiopia and the African Union. “You take it with a pinch of salt, but there is always some element of truth sometimes in the things that we read out of [the] media.”

Pramila Patten, the U.N. special representative on sexual violence in conflict and undersecretary-general of the United Nations, was not on the call but dismissed assertions that, even at that time, reports of sexual violence may have been sensationalized or amounted to media hype.

“On the contrary, testimonies from survivors, taking enormous risks to report, including refugees in Sudan, and reports from health officials pointed to disturbing widespread patterns of sexual violence in Tigray,” she said in a written statement to Foreign Policy.

Chiwara, in a phone interview with Foreign Policy on Thursday, stressed her team’s intent was never to question whether the sexual violence was occurring in Tigray but rather highlight how difficult it was to track the precise cases of rape or sexual violence. She said the purpose of the call was to coordinate U.N. messaging on the matter and help plan how to best provide support for survivors.

She also voiced regret that the leaked call could distract from the United Nations’ work to help survivors of sexual violence in the Tigray conflict. “I feel a bit sad that there is so much talk about this one conversation we had because now we have so many bigger issues on the ground,” she said. “I think we need to focus more on what’s happening now on the ground.”

Even months after the call, however, its impacts are still reverberating within the United Nations and human rights community as other U.N. officials and outside experts question the views voiced in the call and impacts on independent U.N. investigations into the conflict.

During the call in March, some participants also suggested U.N. Commission on Human Rights investigators would have to clear their report’s findings with the Ethiopian government, a key party in the conflict whose military and allied militias were among those accused of perpetrating atrocities against civilians in Tigray.

“Yes, these things are happening on the ground, but we are working on anecdotal evidence. I don’t think we have credible data to actually give … to say that ‘we know that so many women have been raped in this context’ and what have you. Because so far, we don’t have [that data] until OHCHR goes on the ground and produces their report,” Chiwara said, according to the transcript, referring to the acronym for the U.N. Office of the High Commissioner for Human Rights.

“Which of course will need to be presented to [the] government and verified and approved and cleared before we can even refer to it. You know the whole procedure and the sensitivity with the government,” she added. This is an assertion other U.N. officials have since disputed.

The call between U.N. representatives in Ethiopia took place just after the OHCHR announced it would launch a probe into allegations of human rights violations carried out by parties involved in the Tigray conflict, in partnership with the Ethiopian Human Rights Commission. It came weeks after U.S. Secretary of State Antony Blinken assessed that acts of “ethnic cleansing” were committed in western Tigray.

Several outside human rights advocates and other officials in the United Nations, some of whom spoke to Foreign Policy on condition of anonymity, said regardless of the context, U.N. officials should not downplay reports of sexual violence nor seek approval on what they report on the matter from a party in the conflict.

“There was this narrative of media sensationalization being used as an excuse to put a question mark on doing the work of documenting atrocities,” said Akshaya Kumar, director of crisis advocacy at Human Rights Watch. “It’s really important to document with rigor any allegations of human rights violations, but it’s also incredibly important to hold all perpetrators to account, including governments involved in the conflict.”

The views in the call come against the backdrop of a long-standing pattern by U.N. country teams acquiescing to host governments during conflicts or humanitarian crises to maintain smooth working relationships, according to several human rights experts. U.N. teams in Sri Lanka and Myanmar have been accused of dismissing or minimizing government atrocities to balance relations with top government officials.

The United Nations’ top development agency also came under scrutiny after distributing a confidential memo in March on the causes of the conflict, which echoed Ethiopian government talking points and urged foreign countries to focus more on humanitarian goals than reprimanding the Ethiopian government for its offensive in Tigray. The memo was first reported by Foreign Policy.