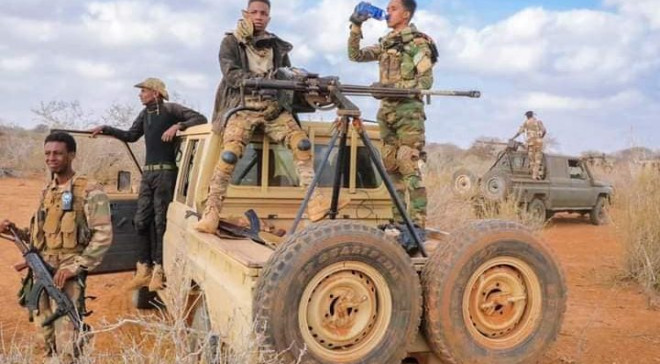 Dozens of Al-Shabaab terrorists have been killed within the Mudug region following the latest crackdown launched by the Somali National Army [SNA], a senior commander has said, noting that the government troops are still ransacking a number of villages in pursuit of the militants.

General Mohamed Tahalil Bihi, the SNA Infantry Commander, said at least 47 Al-Shabaab militants were killed in the latest two days within Haradhere District, within Galmadug with the latest operation coming on Monday. Somali national army is working closely with partners, he added.

Bihi, who has been coordinating most of the operations across the country since September added that the military targeted the Western part of Haradhere, a region that Al-Shabaab abandoned last week. The two-day sweep also led to the recovery of military hardware which was in possession of Al-Shabaab.

Local militia, Galmadug regional troops, the African Union Transition Mission in Somalia [ATMIS], and the US Africa Command closely monitored the operation, he added. According to him, SNA has made massive inroads within central and southern Somalia in the past six months.

"Within two days of operations, we encountered a lot of Al-Shabaab resistance. We counted 47 dead bodies. The people in these areas regularly give us information about the Khawarij Al-Shabaab. They want to be freed from the enemy as soon as possible, and the armed forces have taken control of several areas that have been cleared of those pests," said General Bihi.

"The locals are angry, and they have brought out their weapons. Wherever Al-Shabaab is hiding, including in Mudug and Galgaduud, we receive calls from people asking us to reach their village. This is news that excites us and wakes us up. We will heed their call," General Mohamed Tahleel Bihi added.

The operation targeted five villages according to General Bihi, who also lauded the liberation of the strategic towns of Haradhere and Gal'ad from Al-Shabaab terrorists last week. The militants have been carrying out sporadic retaliatory attacks across the country mainly targeting innocent civilians and members of security forces.

President Hassan Sheikh Mohamud has announced a total crackdown against Al-Shabaab, arguing that the country will be liberated in the coming months. On Monday, Hassan Sheikh opened a three-day forum involving religious scholars who he is working closely with to minimize radicalization which mainly targets unemployed youths.