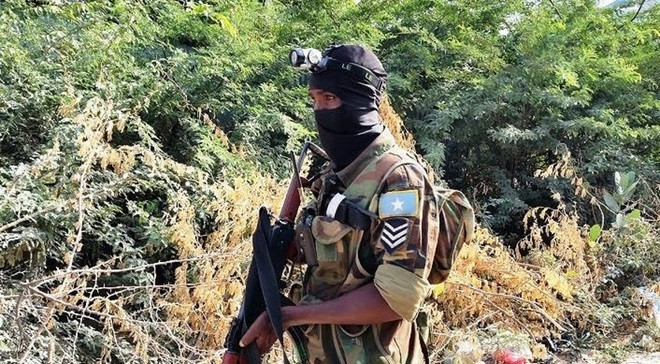 MOGADISHU, Somalia - US-trained Danab troops have been hailed for not taking sides in the recent political crisis which threatens to tear the country apart, and which has attracted attention from the international community, a close partner in Somalia's social-economic development.

Major Abdirahman Omar, a former Danab commander, said the troops showed professionalism by distancing themselves from the current political stalemate, which saw a number of the Somali National Army [SNA] troops taking sides.

Unlike other SNA forces who recently experienced divisions and then sided with parties in dispute of election model in Mogadishu, Danab Brigade, the special force of SNA, he said, "showed a great responsibility, professionalism, integrity, requisite discipline, behavior, and moral obligation to remain stick to its lawful mandate in combating with Al-Shabaab and ISIS terrorists across the country in order to enable Somalia to achieve its long term strategic performance and goal “one person one vote, and a peaceful, stable democratic nation".

The Danab Special Forces Brigade was established in 2013 under the United States African Command, which has been training and equipping them in as many months. Since it was re-established, he noted, all its activities, operation decisions have been consistently in line with its strategic intent and vision serving on the national objectives set out above paragraph.

It is noteworthy, Omar noted, that leadership style, culture and values, and appropriate management processes shaped the way current knowledge is generated, codified, and diffused within Danab Brigade through underlying support of US military genius expertise, which ensured a large part of the country are now free from terrorist, where human rights, rule of law and democracy thrived and succeeded.

"Over the past decade, Danab Brigade made a tremendous achievement in this front by weakening and destroying Al-Shabaab and Daish terrorists across Somalia," said the former commander, who is credited for leading the troops in reigning over Al-Shabaab.

"Such tremendous success could never have been achieved without the support of US government and the immense effort and expertise and skills provided by US genius military officers," added the former commander.

He hailed the Americans for standing with Somalia at the time of the crisis. The US had close to 700 personnel in Somalia but the team left in January this year following redeployment to Kenya and Djibouti, a move that was opposed within Somalia.

"We recognize the significant expertise and skills provided by US trainers to Danab Brigade has been/ is what determined the notorious high performance and clarity in Danab’s strategic direction as well as requisite core competencies and capabilities developed during the past decade," he said.

In the light of the above, he said, "I am delighted once again to commend Danab Brigade for sticking appropriately to the objectives, responsibility, disciplines, values and moral obligation that was created for, as well as maintaining and advancing its operations aimed at eradicating terrorists across Somalia and supporting Somalia achieves its strategic goal towards the peaceful, inclusive, stable democratic nation".

A fortnight ago, SNA troops were hugely divided over the current political impasse in the country. A number of troops allied to the opposition conquered several parts of Mogadishu, a move which may have forced President Mohamed Abdullahi Farmajo to rescind his decision to extend his term for two more years.