In Somalia, civilians take arms to join fight against Al-Shabaab 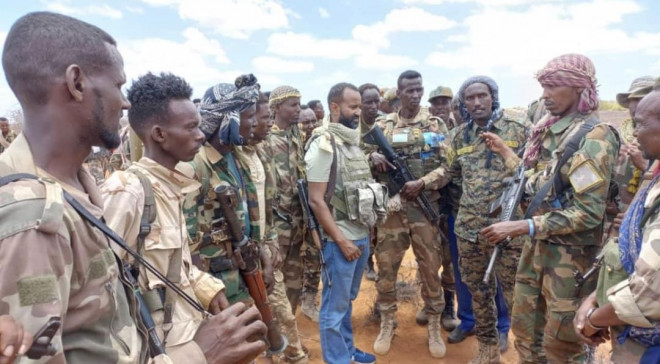 BELEDWEYNE, Somalia - Tired of persistent attacks and raids, thousands of civilians in Somalia have chosen to pick arms and directly confront the Al-Shabaab militants, in what has significantly changed the dynamics and probably resuscitated the fight against the group.

Witnesses said at least 45 Al-Shabaab militants were killed by government-allied militia and some were subsequently beheaded as citizens waged retaliatory attacks against the group which has been controlling Central and Southern Somalia.

For a month, the government in partnership with local militia has heightened operations against Al-Shabaab in the Hiiraan, Galgaduud, and Bay regions of Somalia, killing dozens of the militants in the process.

The Al-Qaida-linked group has been destroying wells, and houses and even beheading innocent civilians, a move which triggered revolt from members of the public who have been immensely affected. The Somali National Army has also been claiming credit for the deaths.

"Al Shabaab is not strong, it just burns people, beheads people, and puts their heads in the streets just to terrorize," said Ahmed Abdulle, a Hiran elder, in an interview with Reuters.

"Now, we are doing the same: we have ordered the beheading of al Shabaab fighters," he told Reuters.

Although the latest retaliatory attacks could not be independently verified, videos making rounds on social media showed heads of the militants scattered everywhere in various villages. The militants were in their usual black headgear and military fatigue.

"Al Shabaab put us in hell...So our people decided to liberate themselves... My daughter is also fighting in the frontline, she has an AK-47 on her shoulder," resident Halima Ismail said.

"This week, we have recaptured nine villages," said Ahmed Shire, the Galmudug information minister. "It is a big revolution by Galmudug state."

In a statement, state media reported that in collaboration with the Somali National Army and local residents killed more than 45 militiamen of Al-Shabab in the Yasooman area under the Bula-Burde district. The operation still continues.

On the other hand, the National Armed Forces shot dead nine militants of Al-Shabab after an operation in the Warmahan area of ​​the Lower Shabelle region where they were trying to organize them secretly, the state-owned media added.

The militants had killed over 22 people who were traveling in trucks carrying food within Hiiraan, necessitating the revolt from locals, who believe Al-Shabaab militants are weak and can be exterminated with serious operations within the country.