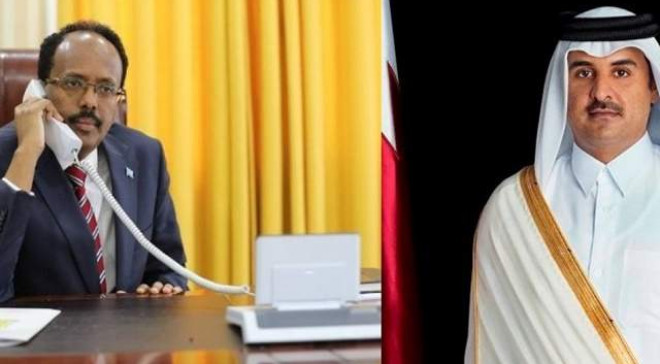 MOGADISHU, Somalia - Amid the ongoing political storm in Mogadishu, the Emir of Qatar Sheikh Tamim has held talks with President Mohamed Abdullahi Farmajo, whose term expired on Feb 8, and who has been accused of sabotaging plans to hold free and fair elections.

Over the weekend, Farmajo rescinded his term extension resolution which had been approved by parliament, instead, chose to engage members of the opposition further on issues elections in the country. The country was supposed to hold elections from December 2020.

And on Monday, Sheikh Tamim placed a phone call to Farmajo where they discussed a raft of issues, which could shape the country's social-economic and political philosophies, which have been a huge bother not only within the Horn of Africa but also across the world.

Reports indicate they reviewed the bilateral relations between the two countries and ways of enhancing and developing them, in addition to discussing the latest developments in the Somalia situation, Qatar News Agency reported.

Sources say the talks came after Qatari envoy Mutlaq Alqahtani told opposition candidates during their meeting in Mogadishu on Sunday that he conveyed a "strong message" from Doha and Washington to Farmaajo whose term as Somalia president expired Feb 8 with no successor in place.

But Mutlaq Al-Qahtani trip to Somalia was not welcomed by all opposition leaders, with some key figures boycotting the meeting. Qatar has been often accused by the opposition of meddling in Somalia's internal politics.

Although Doha has often refuted the allegations, the opposition candidates on Monday further accused Qatar and Turkey of delivering weapons used by Farmajo's administration to oppress the opposition teams besides unleashing on members of the media.

The conversation with the Emir also comes weeks after security forces in Mogadishu clashed, with those supporting the opposition claiming victory. A number of stakeholders have been calling for the demilitarization of the capital.

Farmajo, through Prime Minister Mohamed Hussein Roble, has agreed to reconvene a meeting between FGS and FMS on May 20, 2021. However, Puntland, a state in Somalia, insists the international community should be the arbiter in the conference.