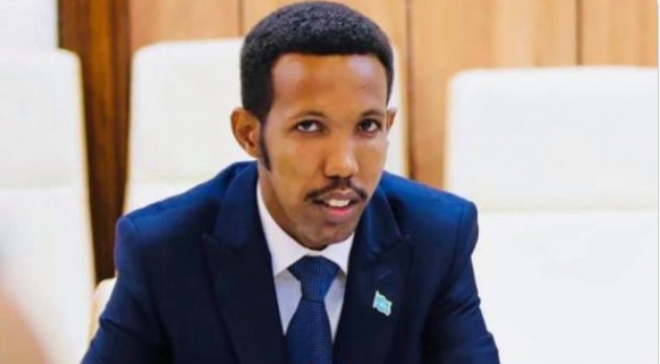 MOGADISHU, Somalia - After days of fighting allegations of planning the disappearance and subsequent murder of Ikran Tahlil, acting National Intelligence Security Agency [NISA] Director Yasin Farey has officially joined politics as he runs for a parliamentary seat in Galmadug state.

For months, Yasin Farey has been battling allegations regarding Ikran's murder, along with other three individuals from the agency. Ikran Tahlil was working at the agency as head of the cybercrime unit before her disappearance.

On Monday, Yasin Farey was awarded a certificate for participation in the upcoming Lower House polls in Galmadug. His decision to join politics corroborates Garowe Online finding that a number of close allies of President Mohamed Abdullahi Farmaajo will be joining the race.

Already, the Galmudug State Indirect Elections Team [SIET] awarded the certificate to Farey and six other candidates participating in the Lower House elections.

Yasin Farey was appointed to the post on October 23, 2021, following an agreement between outgoing President Mohamed Abdullahi Farmaajo and PM Mohamed Hussein Roble. The two had fallen out following the sacking of Fahad Yasin, the immediate former NISA boss.

Fahad Yasin, a bureaucrat within Villa Somalia, was appointed Farmaajo's National Security Advisor after leaving NISA to the detriment of PM Roble. It is also anticipated that he will contest for elections this year.

However, Garowe Online cannot independently verify if Farey had resigned from his position as acting director of NISA, as stipulated by Somalia's electoral law. Farmaajo is keen the defend his seat.

Farey will be contesting for HOP67, which has come under scrutiny in recent days. Former NISA director Brig. Gen Abdirahman Turyare, one of six candidates vying for the seat, said there was a Villa Somalia plot to rig the election on Farey's behalf and warned against electoral interference.

The country is under pressure from the international community to hold the Lower House indirect polls after months of delay. President Mohamed Abdullahi Farmaajo is accused of orchestrating the delay in the country.

Over the weekend, the military court cleared Yasin Farey of the controversial murder of Ikran Tahlil, arguing that there was no sufficient evidence. The court blamed Al-Shabaab militants for the death.

Later on, and for the sake of reconciliation, the government will engage the militants for formalized talks, he added.

Uganda to reduce UPDF troops in Somalia amid Al-Shabaab crackdown

Somalia: We can’t give Robow weapons and ask him to fight, says president